Did you watch Planet Earth Live on Sunday night?  I did and there were some enjoyable moments in it.

It seemed to be all about going ‘Awww’ at cute little mammals that were having a tough time of making their way in the world – but enough of the presenters Richard Hammond and Julia Bradbury. I’ll stick with it, because nature is wonderful but I did wish I’d switched over to the snooker a bit earlier. Calling the programme ‘Live’ was asking for trouble when nature is unbiddable and so there is bound to be an awful lot of ‘this is what happened a few days ago’ going on.  It all felt downmarket, shallow and bitty. Not the BBC’s finest hour and it’s  shame becaues nature needs all the fans it can get.  To be fair, maybe this programme will increase the number of animal enthusiasts who will then support serious nature conservation work – I hope it does,  but at the moment it is not my cup of tea.  Is it yours? 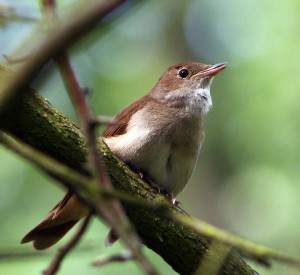 Over the weekend I did hear my first cuckoo of the year (so very late) on my first visit to my second BTO/JNCC/RSPB Breeding Bird Survey square.  What a relief!  And I visited a BTO Nightingale survey square a couple of times and was delighted and surprised to hear one nightingale on the first visit.  This was in a wood near where I live that is off the beaten track and I had never visited it before.  The nightingale sang beautifully for 20+ minutes on Saturday morning and I glimpsed it briefly a few times.  When I returned on Monday morning it was still there singing away, and perched out in full view for a few moments. But even better, there was another male there too.

Have you heard nightingales singing – ever? Find a way to go out and experience it some time.  Keats wasn’t kidding when he talked about ‘full throated ease’.  Listening to an unseen nightingale belting out its song, in short phrases in the gloom of the evening, when almost every other bird is silent, is a magical European experience.

If you live south of the Wash-Severn line (and not in Devon or Cornwall) there will be a nightingale somewhere near you even though they are thin on the ground.  It’ll be singing in the evening and early morning (and occasionally during the day – but then, so does everything else) for several more weeks.  Listen for the short phrases, the whistles, the variety, the croaks, the chug-chug-chug phrases and the loudness.  Listening for nightingales might give you an excuse to experience planet Earth live – really live!