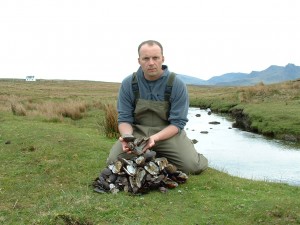 Peter Cosgrove’s passion for pearl mussels began in 1996. He carried out the first national pearl mussel survey and in one of those wonderful moments of happenstance, submitted his final report which recommended full legal protection during a periodic review of the Wildlife and Countryside Act.  It had the desired effect and the law was changed in 1998 and Peter always highlights this to those cynics who think our conservation efforts are pointless and make little or no difference. Since then Peter has spent hundreds of days in more than a thousand Scottish rivers and burns surveying for pearl mussels.

Mark has kindly asked me to write a guest editorial on an issue close to my heart after reading his blog on wildlife crime.  For 17 years I have worked on an obscure, and important species called the freshwater pearl mussel.  It was once very numerous but is now globally threatened and a high proportion of world’s remaining populations are found in the Britain.  It is currently in very serious trouble.

The Roman biographer Suetonius, after speaking of the admiration which Julius Caesar had for pearls, stated that their occurrence in Britain was an important factor for inducing the first Roman invasion of Britain in 55BC.  Given the profound effect this subsequently had on Britain I can’t help but think of misquoting John Cleese and Monty Python with ‘what did the pearl mussels ever do for us’ line.  The species also has a fascinating symbiotic relationship with our native Atlantic salmon and sea/brown trout, which carry the tiny microscopic mussel larvae on their gills as they migrate up and down our rivers.

Freshwater pearl mussels live on the beds of fast-flowing, unpolluted rivers and subsist by inhaling and filtering the minute organic particles on which they feed (each mussel filters ca. 50 litres of water a day).  Where naturally abundant (and many of our rivers used to have millions of them), this filtration acts to clarify the water to the benefit of other species such as salmon and trout, especially around their spawning and nursery areas.  When left alone they can live in excess of 120 years.  They are one of those keystone species, which ecologists get excited about.  I have often wondered which British species have had the greatest impact on us Britons (rather than everyone, like say the earthworm) and I think that Margaritifera margaritifera would ‘medal’ if it came to a contest.  An idea for Spring Watch perhaps?

Pearl mussels are now fully protected and thanks to recent awareness raising efforts, more people now know about this species than previously.  However, not everyone is enlightened and some people actively seek to destroy the last of this species.  In an attempt to highlight this threat, I have written an article with colleagues on wildlife crime and pearl mussels in this month’s British Wildlife magazine.  Most people know of tiger and rhino poachers and those custodians of the countryside who hate raptors, but few know of the illegal pearl fishers who kill thousands of mussels every year in Scotland in an attempt to find an illusive pearl.

Illegal damage to pearl mussels has been recorded every year since the species was fully protected in 1998.  Indeed the National Wildlife Crime Unit has recorded at least 10 incidents of criminal damage, or suspected criminal damage, every year since then.  However, it is believed the real annual number could be as high as 30.  These incidents have been recorded across the Scottish mainland, from Dumfries and Galloway to Sutherland and several in the Hebrides.

So what can be done?  Given the high proportion of the remaining pearl mussel populations found in Britain, we have a moral and legal obligation to protect this species.  Fishermen, estate workers, ecologists, walkers, locals and tourists in Scotland are urged to be vigilant for people acting suspiciously around watercourses and report suspicious activity to the police as soon as possible.  This can include people using glass-bottomed viewing buckets and finding dead pearl mussel shells in and around rivers.  Politicians and the media should raise the profile of wildlife crime with the public and ensure pearl mussel conservation is given the highest priority.  Pictures of shot or poisoned golden eagles should and do make us angry and we should have the same response to those criminals who target less ‘charismatic’ protected species.  Wildlife crime is having a devastating effect on the last of the Scottish pearl mussels and increased efforts are needed to protect this fantastic and important Mollusc of the Glen.