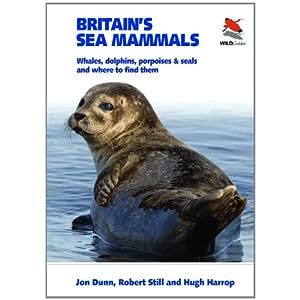 The fact that these memories are still quite sharp in my memory after several decades tells me something of the fascination that such marine mammals have for me, and probably for you.

The fact that I was guessing as to the identity of what I had seen tells me that there are plenty of us who have been waiting for this book – which I think is an excellent one.

This is not just a field guide – though it is a very good guide to cetaceans and seals in the field – but this book tells you about where to go, when to go and quite a lot about the ecology and conservation of the species that you might see.

I now know what the following words mean: lobbing, chorus lining and bottling.

Seals are fun, but cetaceans are a treat. Seals sit on the shore looking like bananas but cetaceans swim past and always seem, to me at least, wild and wonderful.  I’m looking forward to spending more time gazing out to sea with this book close at hand.  Now I’ll have a much better chance of knowing what I’m looking at.

There’s not much point telling you how much a book costs these days because ‘it all depends’.  Here are links to Amazon,NHBS and the publisher’s website.  It’s a good buy.