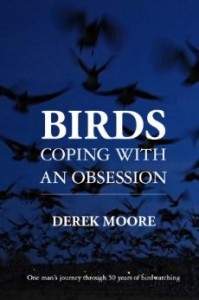 Derek Moore is a character.

This is the story of Derek’s 70 years of working in a bank, playing in a band, playing cricket, birding and being a nature conservationist working for the Wildlife Trusts.  I found all the different bits interesting – and that photo of him playing cricket makes him look like quite a stylish batsman.

I’ve known Derek for many years – I’m not sure quite how many.  He has always been outspoken and he has usually been right.  Derek was one of the senior members of the Wildlife Trusts whom I used to seek out for his views on tricky issues – I’d always get a perfectly clear view from Derek delivered in the most delightful Suffolk accent.

Because he has been around a bit, Derek has seen a bit of life and he’s met a few of life’s (other)  characters.  I was interested to read of his views on Herbert Axell and the tales of fighting Felixstowe Dock expansion.  I have a different version of how the RSPB and the Suffolk Wildlife Trust ended up jointly managing Dingle Marshes but I agree with Derek that it has worked out well.

Derek admits that he isn’t always an easy person to work with (I have no knowledge of that – he’s a delightful person to gossip with!)  and he clearly feels a bit unloved by some in the Wildlife Trusts for despite his long association with them over 40 years, boy and bearded man, they aren’t, it seems, tapping into his knowledge as much as they could.  But others are, and Derek is never going to run out of groups to energise, committees to influence and friends with whom to go birding.

I was fascinated by the insights he gives into the Wildlife Trusts – written with great affection but a lot of honesty too.  And I was pleased to see that Derek and I agree quite considerably about the state of wildlife NGOs today  – I told you he is usually right!

This is an enjoyable read, particularly if you would call yourself a birder, but there is much wisdom in here too.

Derek Moore has seen lots of rare birds, has played on the same bill as The Kinks and the Who, has scored a few runs and has made a difference in nature conservation.

Derek Moore is a character.

Derek Moore’s book, Birds: coping with an obsession, is published by New Holland and is available on Amazon as is Mark Avery’s book Fighting for Birds.

But you’ll also find Derek giving a talk at the Bird Fair this Friday in Lecture Marquee 3 between 4pm and 420pm and then signing books on the Wild Sounds stand immediately afterwards.