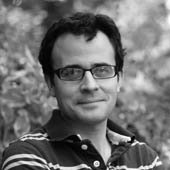 Nick has been with WWF-UK since 2010 and heads up their climate change and energy policy work. Prior to joining WWF, Nick spent 6 years with city law firm CMS Cameron McKenna, working as an  energy solicitor on a wide range of energy projects and climate change related issues. Nick has a First Class English Law and German Law degree from the University of Kent, where he specialised in Environmental Law and in particular on the viability of emission trading schemes as a tool to tackling climate change. You can follow Nick on twitter on @NickMolho.

The publication later in September of the latest report from the Intergovernmental Panel on Climate Change marks the start of a significant series of milestones over the next two years that will give the world a chance to prevent the worse impacts of climate change. The international community, aided by key countries like the UK, must seize this opportunity says Nick Molho.

The publication on 27 September of the first of a series of four reports by the Intergovernmental Panel on Climate Change (IPCC) will be a major event.  It will of course be significant in that it will provide the latest in-depth scientific review of our understanding of climate change, with the series of reports covering some 3,000 pages and involving well over 800 authors.

However, it’s fair to say that the environmental and economic case for urgently tackling climate change has already compellingly been made in recent reports from a range of major international organisations such as the International Energy Agency, the World Bank and the United Nations Environment Programme.  In a nutshell, these organisations recently concluded that while many (but certainly not all) of the worst projected impacts of climate change could still be avoided by holding global average temperature rises to below 2ºCelsius compared to pre-industrial levels, the world is currently on track for a warming far in excess of that threshold over the course of this century.

They further warned that the projected levels of warming were likely to severely undermine the provision of so-called “ecosystem services” from the natural world (on which the world economy is very dependent) and risked disproportionately impacting “many of the world’s poorest regions, which have the least economic, institutional, scientific and technical capacity to cope and adapt” (World Bank).  And for an organisation like WWF, unmitigated climate change threatens to undermine much of the conservation work that we have carried out over the last 50 years.

While it is still possible to prevent temperature increases in excess of 2ºCelsius, the window of opportunity for doing so must be rapidly seized.  Importantly, these reports make clear that the longer we delay action to reduce our emissions of greenhouse gases, the more expensive tackling climate change will become.  In the words of the International Energy Agency, “delaying action is a false economy: for every $1 of investment avoided in the power sector before 2020, an additional $4.3 would need to be spent after 2020 to compensate for the increased emissions.”

So, what is arguably more significant about the publication of the IPPC report is that it will mark the start of a series of political events over the next two years at the national, European and international level, which provides an important opportunity to prevent global average temperatures rising by more than 2ºCelsius.

In the UK for instance, the Committee on Climate Change is currently reviewing its advice on the speed at which the UK needs to reduce its emissions in the 2020s to stay on track for meeting its legally binding goal of reducing emissions by at least 80% by 2050 compared to 1990 levels.  The Committee’s revised advice is expected in December this year and the Government will be making a decision on whether or not to adopt this advice in spring 2014.  As the country that was the first in the world to enact binding climate change legislation and that has inspired the development of similar legislation elsewhere such as in Mexico, it will be vital for the UK to be seen to take its Climate Change Act commitments seriously.

Discussions have also started on a future package of legislation that will contain the EU’s climate and clean energy objectives for 2030. While it may take a few years for this package to be finalised, EU leaders will soon have to agree on an emission reduction goal for 2030 that they can put on the table at the international climate change talks in 2015.  Anything less than a proposed 50% cut by 2030 compared to 1990 levels (the highest figure currently being pushed by the UK Government) would look woefully inadequate to tackle the climate crisis and unlikely to get other major players such as the United States and China to put ambitious figures on the table.

At the international level, there is of course the international climate change talks taking place in Paris in 2015 (just months after an equally important international development summit), seen as the best chance of getting a global deal to tackle greenhouse gas emissions in the 2020s.  Importantly, UN secretary general Ban Ki-moon is likely to host a climate change summit in September 2014 to help boost ambition in the run-up to the 2015 talks.  Beyond the adequacy of the EU’s commitments, this early summit will help test whether the positive rhetoric on climate change from other major emitters such as China and the United States can indeed translate into emission reduction pledges that are in line with the urgency of action called for by the scientific community.

This upcoming window of opportunity and sequence of events provides the international community with a real chance of preventing the worse impacts of climate change and tackling emissions cost-effectively.  It could also provide significant growth opportunities for those countries that make an early and decisive move towards a low-carbon economy – the UK with its expertise and research capabilities in areas such as offshore wind, wave & tidal power, carbon capture & storage and electric cars, could be a case in point.

For the international community to seize this opportunity, key countries around the globe – including the UK – must support a political race to the top, by pro-actively backing strong action to reduce emissions both domestically and internationally.  Hoping for the best at the international climate change talks in 2015 and adopting a “wait and see” approach until then is simply not an option.