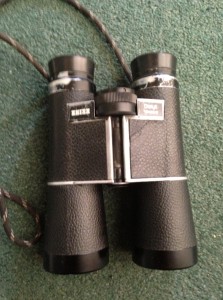 I would be very surprised if readers of this blog have been worrying about the fate of my binoculars since I dropped them on the concrete outside a motel at Carlsbad Caverns, New Mexico, on 23 June.

A few days later (28 June to be precise) I took them into Hawkins in Northampton to see whether they could fix them or not.

Now I was worried that they might not be able to fix them for two reasons.  First, I’d have to pay a lot of money for a replacement, and second, they were my 18th birthday present from my parents and are of considerable sentimental value to me (37 years later).

How can you be sentimental about a pair of binoculars? I don’t know, but I know I am.

I have seen every one of the species of bird that I have ever seen through those binoculars and they are a part of my life and a part of my birding. So, I was relieved when Hawkins told me they could fix them, and it would probably take a couple of weeks and cost less than £250.

I got them back on Friday – yes, that’s a bit longer than two weeks (in fact it is 10 weeks to the day) – and they tried to charge me a little bit more than £250 but we soon sorted that out.  Would I recommend Hawkins to you – I’d think twice, quite honestly.

They haven’t done a quick job but they have done a good job.  Most of the optics have been replaced and so, to be honest, they are now, optically, as good as new rather than, in the moment before they hit the concrete in New Mexico, as good as old.

And if, when I waked into the shop, worried that my binoculars were essentially dead, I had been told that I could have a new pair, optically better, but basically the same, for £250 then I would have said ‘yes’ on the spot.

They carry the signs of wear that mark them out as mine, but I am now wondering whether they are the same binoculars or whether they are really a new pair.  And if so, do I need to start a new life list with them?