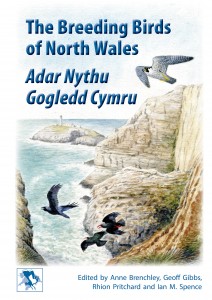 …also known as The Breeding Birds of North Wales, edited by Anne Brenchley, Geoff Gibbs, Rhion Pritchard and Ian Spence – but I guess you realised that.

There are going to be lots of atlases around this year and next, I guess, as spin-offs from the Britain and Ireland Bird Atlas (to which I intend to devote several days of blogging when it emerges in November).  I love bird atlases.  And this one is a very interesting example.

It’s quite a big book and quite a thick book.  I liked the cover as soon as I saw it and only later realised the artist is Philip Snow who provided the cover for my (and Roderick Leslie’s) book, Birds and Forestry. The contents look good – clear maps, some beautiful photographs, understandable tables and a few graphs.

I don’t know this part of Wales particularly well, but I know it a bit. The area covers the Lleyn peninsula, Anglesey (Ynys Mon), a border with English Cheshire, Snowdonia and south to the Dovey Estuary.

You might wonder what a regional or county atlas can add to the B&I version that is eagerly awaited. The answer is clear here; more detail (so this is a tetrad atlas summarised for comparison with earlier national atlases at 10km square level as well), more local knowledge and interpretation (and you get that in the text) and therefore more focus on the local story and issues.

The comparisons with the first breeding bird atlas, 40 years earlier, are fascinating.  The expected increases (eg raptors, Red-legged Partridges,  Ravens, Siskins) and decreases (eg Corncrake, Lapwing, Grey Partridges, Tree Sparrow) are all there – and interesting to see in this local detail. There are also some, to me, more surprising changes.  Have a look at many of the ducks,Common Crossbill, Hawfinch and Lesser Whitethroat as examples.

This book is a good reminder that there is always good news and bad news in the changing face of nature.  At the time of the first breeding atlas I knew too little about birds to predict anything but did anyone think that Dartford Warblers, Little Egrets and Mediterranean Gulls would be breeding in North Wales now (and is it good or bad news if driven by climate change – discuss?) and would they have thought that Turtle Dove and Corn Bunting would be gone (or nearly so)?

The most interesting bird in Britain is probably also the most boring one. And it is revealed in all its interesting boringness here, particularly in the tetrad records, but also in the change maps.  The coast-hugging Rock Pipit looks like a pretty dull and dully pretty pipit. Its distribution doesn’t change much.  It lives its life within a few yards (or metres, if you will) of the tideline. It’s difficult to see why it can’t live in a wood (like a Tree Pipit) or on a moor (like a Meadow Pipit) but it doesn’t.  It is the John Major of birds – grey, constant, resolute, determined and quite effective.  If we were to come back in 10, or even 20, years time and find that the Rock Pipit distribution had changed then I would be amazed – or maybe I wouldn’t because birds are amazing!

This is a book to take with you to a Desert Island because it is fascinating, and because part of its size is dictated by having some dual-language parts, so as well as learning the birds of North Wales you could try and learn Welsh through bird distributions.  I’m tempted to give it a go.

The Breeding Birds of North Wales, (or Adar Nythu Gogledd Cymru) edited by Anne Brenchley, Geoff Gibbs, Rhion Pritchard and Ian Spence is published by Liverpool University Press and is available from Amazon, as is Mark Avery’s Fighting for Birds.