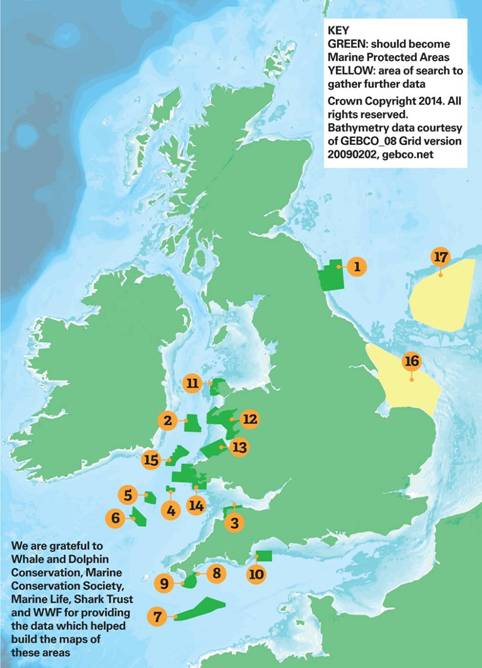 Today a new report,  Save Our Ocean Giants – the protected areas we need for dolphins, whales and basking sharks, identifies 17 important ‘megafauna hotspots’ around our shores for the first time and highlights the need to protect them.

The report explains why The Wildlife Trusts want to see these newly identified hotspots (special areas on which whales, dolphins and basking sharks most depend) protected by law. This would secure the missing link in marine protection for English and Welsh waters.

The UK Government is working towards achieving an ‘ecologically coherent network of Marine Protected Areas’, however, there’s a glaring omission in this process: the absence of protection for the nutrient-rich and highly productive places on which marine megafauna most depend.

“Many people are surprised to discover that in the waters surrounding our shores you could encounter 29 different species of whale, dolphin and porpoise and the second largest shark in the world – the basking shark.  However, there’s an urgent need to create protected areas at sea for our ocean giants and ensure a network of sites to safeguard these species for generations to come.

The UK has made huge advances in marine conservation in recent years but there is still a significant job to do.  Our marine megafauna – whales, dolphins, porpoises and basking sharks – are still under threat.  Many are suffering from the impacts of fishing, whether direct or indirect, increased boat traffic, marine developments and the more persistent effects of pollution – many substances bioaccummulate and affect generations of animals and overall population health.

Not all of these impacts can be mitigated by spatial protection measures alone but, by designating areas of the sea which are known hotspots, we can provide safe havens for these species and some impacts can be limited or removed altogether.”

The Wildlife Trusts are urging the public to sign an e-action which calls on the Government to protect the 17 megafauna hotspots around our shores to secure a brighter future for dolphins, whales and basking sharks.