James Marchington has a go at me in something called ‘ishoot’.

Apparently I am having a mid-life crisis and should have run off with my secretary on a Harley Davidson instead of campaigning about the ills of grouse shooting. Thanks for the advice James.

There was a time when James wrote rather good pieces about the grouse shooting industry, like this one ‘Poisoned eagles and the Osborne connection‘ which I’ve always considered quite brave of him.

At least James is clearly reading this blog, as do so many involved in grouse shooting, and he has assimilated some of the arguments it seems: 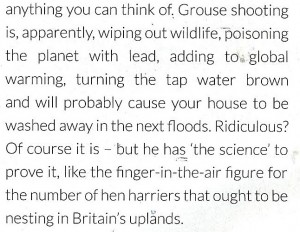 And James is really irrritated by Henry and by you too – at least if you were one of the hundreds of attendees at Hen Harrier Day rallies across the country.  I’ve met James and quite like him (and he writes well). Have you met James Marchington? No? well he knows all about you – you are a ‘mithering anti’ apparently:

Watch the video mash-up of Henry’s travels on YouTube.

14 Replies to “Marching on”