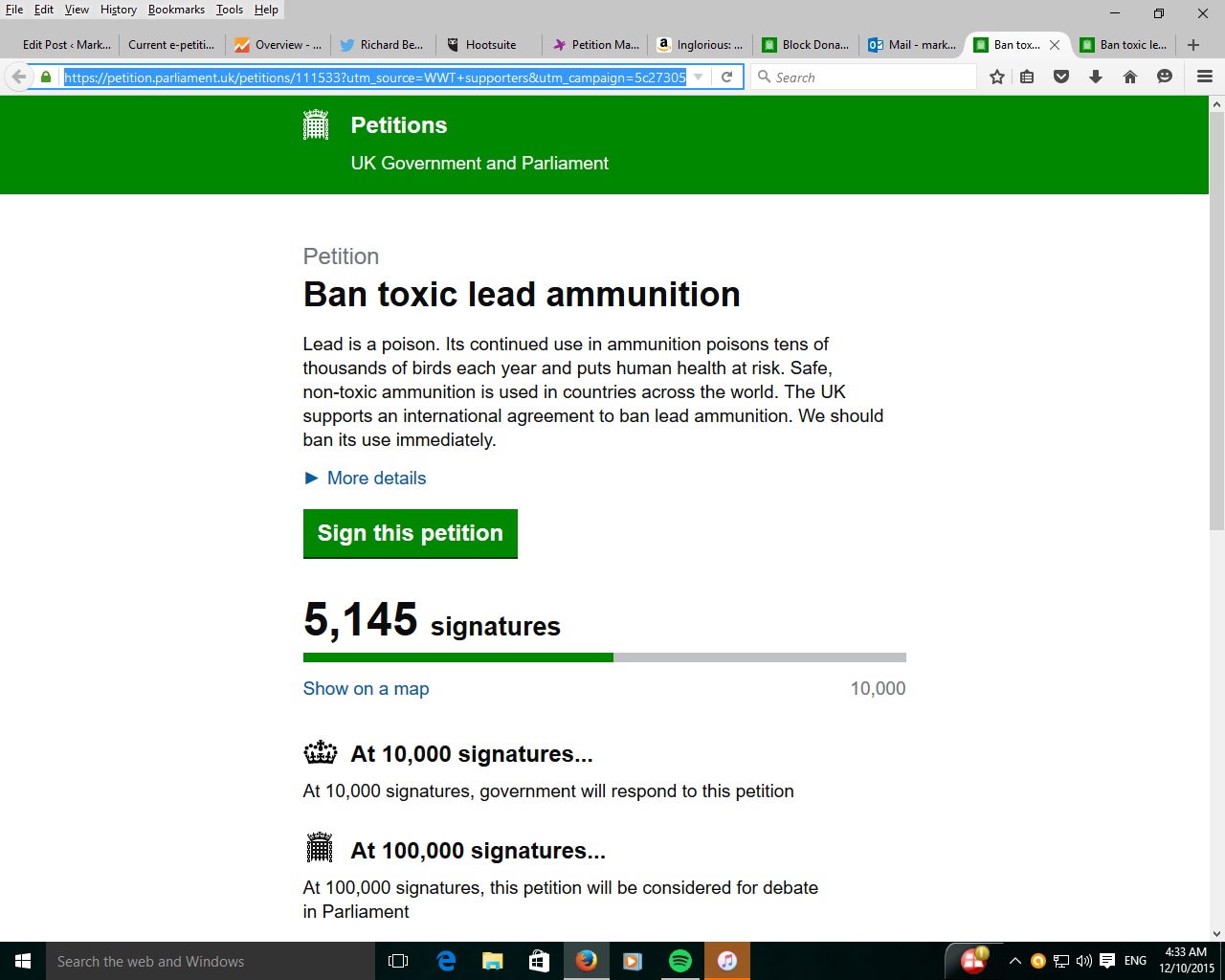 Yesterday saw a surge of support for Rob Sheldon’s e-petition to ban toxic lead ammunition from use. It passed the 5000 signatures mark with well over a thousand new signatures in one day.

Not, perhaps, as impressive as over a third of a million signatures to ban Donald Trump from entry into the UK arriving in less than two whole days, but pretty good all the same. Congratulations to Rob for passing this milestone.

How was it, after a month, that there was this sudden surge of support? It was because an NGO, the Wildfowl and Wetlands Trust, did what NGOs should do, and asked its members for support on a matter of core importance to its charitable objects, and a matter of public good.

This is the text of what WWT sent out and arrived in my inbox a little before 4pm yesterday:

Would you like to do something for the UK’s wild ducks, geese and swans that’s quick, easy and free?

New figures estimate up to 100,000 wildfowl die each year by ingesting lead ammunition, left on the ground after shooting.

Lead is toxic, that’s why it’s been removed from paint and petrol. But it’s still used in shooting and at least 2,000 tonnes of lead pellets – the equivalent weight of 2 million bags of sugar – are left scattered across fields every year. Our wildfowl often mistake the pellets for food or grit, and eat a poison that can kill them.

You can help our ducks, geese and swans by simply signing this petition asking for an immediate ban on using lead shot. Watch our video to find out more.

This issue isn’t about being either anti or pro hunting. It’s about pollution killing birds, when it’s unnecessary because non-toxic alternatives to lead are available.

WWT’s position is that voluntary measures and partial regulations on using lead haven’t worked, so a ban is the only option left. We want lead phased out fully by the end of 2017. If you agree, please sign the petition.

That’s the way to do it! Well done WWT!

And at this festive time of year it makes such a change for a wildlife NGO to ask me for my active support for nature conservation rather than ask me for my money in some way.  I’ve been asked to join a movement rather than make a payment. I’ve been asked to be a nature conservationist not a consumer. I’ve been asked to help WWT make a difference not a profit. That is so refreshing in itself that I feel better about the world and much better about WWT as an organisation. I might even give them some money I feel so well-inclined towards them this morning.

And just as it should be, the WWT has been a leader on this subject.  Others should now follow.  They should include the RSPCA, the RSPB, the National Trust and the League Against Cruel Sports.

And they can include you, too, if you sign Rob Sheldon’s e-petition to ban toxic lead ammunition right now.

And, of course, we should not ban Donald Trump from entering the UK, we should let him in and give him a platform to look foolish and wrong, because we believe in free speech, and in our democracy, as in his own, he would be derided but not silenced.

9 Replies to “Congratulations to Rob Sheldon – and WWT”