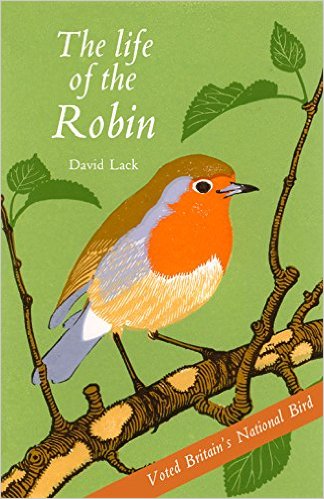 This book is a classic and has been reissued with an introduction from David Lindo (whose National Bird Vote firmly established the Redbreast as our national bird) and gorgeous artwork by Robert Gillmor (as in the 1965 edition but with a spanking new cover). And this re-issue also has an account of the importance of the original book by Peter Lack, son of the author and another ornithologist, as well as a short chapter by David Harper on modern Robin studies.

The original book is a classic, was published in 1943 and written by certainly the most outstanding and influential British ornithologist of the 20th century, and one of its greatest thinkers about evolutionary ecology.  David Lack wrote many books about evolutionary biology and they were all illustrated by his knowledge of avian biology. But this was his first book, written during the war, about observations made when a teacher at Dartington Hall.  In theory, it is a book that many could have written as it required only basic bird-catching and watching skills, of a widespread and common bird.  But it also required the prepared mind  and it is a mark of Lack’s greatness that he interpreted so clearly what he observed.

I never met David Lack, who died in 1973 after decades of being based in the Edward Grey Institute in Oxford, but I’ve heard plenty of stories about him, from his students and colleagues. He was a hero to almost all and his influence lives on through his work and the students and colleagues he brought into his field of study.

This book is still a good read, although written in the precise and unflowery English of the 1940s.  And the modern additions all add to the pleasure of reading this book. I treasure my worn and tattered Pelican copy of the 1953 edition but this new edition is not simply a reprint, it is a valued, attractive and careful revision and interpretation of that early work.

The Life of the Robin by David Lack is published by Pallas Athene.