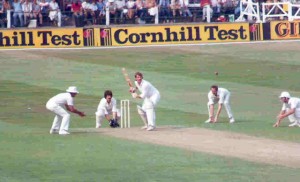 This award ‘gives recognition to individuals in the world of game shooting who truly deserve it, for all the right reasons‘ apparently.

The award has been invented because ‘the game shooting community must do all that it possibly can to ensure that the right image and messages about our beloved sport are conveyed‘ and that’s why they have chosen, of all people, Sir Ian Botham to be the role model for game shooting.

Sir Ian has been used as a spokesperson by You Forgot the Birds – a group funded by the British grouse industry which includes Crispin Odey and which has attacked the RSPB several times over the last few years (see here, here, here, here).  This is, presumably, the type of behaviour that Fieldsports and the game shooting industry wish to promote and recognise. Another own goal by the shooting industry which is increasingly in disarray over its PR in the face of increasing scrutiny and criticism. So, they have chosen the spokesperson for the most vitriolic anti-RSPB group they could choose. Smart move guys!

We will watch with interest to see whether GWCTadpoles, BASC, Countryside Alliance and Moorland Association pour further honours on Sir Ian’s head and we notice that Ian Coghill (chair of GWCTadpoles) was speaking at the event along with Nigel Adams MP (Selby and Ainstey, 78 signatures)

The RSPB didn’t say ‘We welcome this much-deserved award to our great collaborator Sir Ian. We have enjoyed working closely with Sir Ian and his mates in YFTB over a range of important issues. There’s nothing like close collaboration to move things along.’.

Shania Twain said ‘Dance with the one who brought you’.

This blog says, there is only one thing that will get the grouse shooting industry to mend its ways and that is a strong signal that their end is nigh – sign this e-petition to ban driven grouse shooting and add your name to 43,000 others.