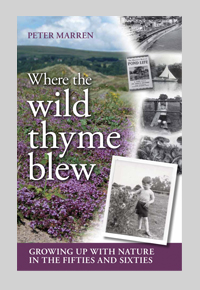 Peter has also written a number of Guest Blogs here and I hope he will write some more.

This book is one that the author wanted to write and is a mixture of autobiography of a boy growing up in the 1950s and 1960s and his love affair with nature (other loves do appear and exit in the book’s pages too).

If you read the Twitcher in the Swamp column in British Wildlife magazine, and I always do, then you will find, occasionally, some similarities in style and wit in these pages.

This book is rather more about growing up in a distant time rather than about nature in that distant time, but from an early age nature was a large part of Peter’s life and he got to grips with nature rather sooner, and rather more easily, than he got to grips with girls, disco dancing or the rest of human life. So there is plenty of nature in this book, written by one of the best naturalists I know (though I am easily impressed by anyone who can identify every British plant and most British insects).

For me though, the nature was just the right amount of delicious icing on the cake whose most noticeable ingredients were self-deprecating observations about himself, wry observations of others, and memories of a bygone age when one’s parents talked a lot about ‘The War’, when it was almost impossible to buy a decent cup of coffee, and when there were 240 pennies to the pound and each of them was the size of a poker chip.

Peter’s first years were in the reign of George VI and this book stops short of the referendum vote that confirmed the UK’s enthusiasm for being members of an economic community that would ensure peace in a continent accustomed to war.  Yes, that seems a long time ago.  England was a green and pleasant land and, yes, that greenness is now somewhat diminished along with many other aspects that made life pleasant.

This is a very English book that deserves a very wide readership. You won’t find it on a well-known website named after a mythical race of women (or a long river in South America) and it has no ISBN so if you still have a local bookshop (which you probably don’t) then they may not be able to help you much either. But it will be worth the small amount of effort to track down this delightful book from the pen (and I wager it was a pen rather than a keyboard) of this delightful naturalist.

Where the wild thyme blew by Peter Marren is published by Peter Marren and can be purchased from the Naturebureau  and is also available from Natural History Book Service (signed) at £14.99