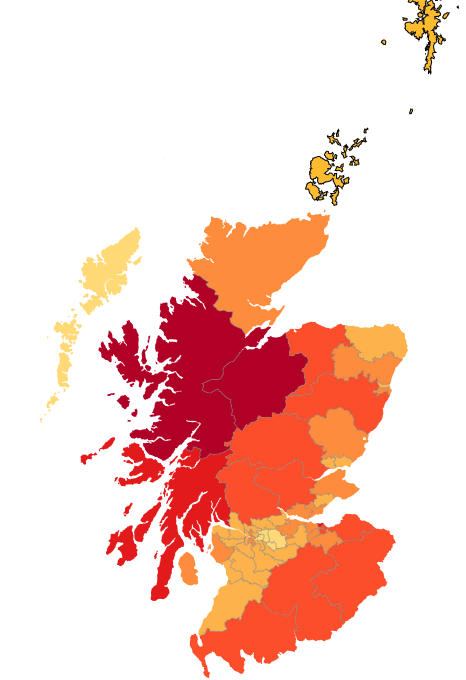 Before tackling the tricky issue of SNP MPs in the Westminster parliament, let me just say that support for our e-petition has been very strong in Scotland: it has received c12,000 signatures from Scotland out of a UK total so far of 118,000 – that’s c10% of all signature compared with Scotland representing c8.4% of the UK population.  [Incidentally Wales currently provides c4.8% of UK signatures (exactly the proportion of the population that lives in Wales) and Northern Ireland provides under 1% of total signatures cf 1.8% of UK population].

Here then is the standard response being sent out by several SNP Westminster MPs to their constituents:

‘Thank you for taking the time to contact me and for expressing your concerns about the impact of driven grouse shooting on the environment.

I should say at the outset that responsibility for the environment and for wildlife management is devolved to the Scottish Parliament. The fight against wildlife crime remains a high priority for the SNP Scottish Government, and of course all shooting businesses must comply with the law. A range of measures to combat wildlife crime have been introduced, but the Scottish Government has been clear that if current measures are found to be insufficient, it will consider further measures for protection.

I fully recognise, however, the positive role that is played by shooting estates in the management of Scotland’s natural environment and in wildlife conservation, and the Scottish Government will continue to work with shooting estates to achieve positive outcomes in this area. The Scottish Government and Scottish Natural Heritage support the Wildlife Estates Scheme – an initiative to encourage high standards of wildlife management led by Scottish Land and Estates – and also values Scottish Land and Estates role in the Partnership Against Wildlife Crime. I also recognise that well-managed grouse moors can make significant contributions to biodiversity targets, particularly with regard to upland wader species such as lapwing, curlew and golden plover.

The positive role of shooting estates will further be supported and enhanced by the Scottish Government’s Land Reform Bill, which will help to ensure that Scotland’s land works for all of those who live and work on it. The measures in the Bill will help to further encourage and support responsible and diverse land ownership, and ensure that communities have more of a say in how land is used.‘

As many of you have suggested when forwarding these on to me – this is an unsatisfactory response. These are Westminster MPs offering to do nothing to help their constituents in Westminster constituencies.

This is how I would respond if I were you (but I have used some phrases here, some quite ‘firm briefing’ phrases, suggested to me by readers of this blog):

Dear [name of your SNP MP]

I am well aware of the fact that environment and wildlife management within Scotland are devolved issues to the Scottish Parliament. I am a sophisticated voter in Scotland – please do not talk down to me. I am also well aware that you are paid to be my Westminster MP and to represent my views in the UK parliament and I would like a better indication that you are prepared to do that on this matter which is very important to me.

Please could you send me, with your reply to this letter, information on your record of attendance and speaking in the Westminster parliament as I am now interested in how engaged you are with the process and this might affect how I vote in the next UK general election (and, perhaps in Scottish parliament elections too).

The e-petition which I signed was open to all UK citizens and residents and the fact that it is one of very few to pass the 100,000 signature mark means that it will be discussed in a Westminster Hall debate in the UK parliament and that debate is open to MPs from all four UK countries.  I believe that SNP MPs have a lot to contribute to those debates and I see that many (eg Drew Hendry, Brendon O’Hara, Ian Blackford, Stuart Donaldson) have spoken in them in the past – indeed, is it not the case that because of the number of seats held by the SNP in the Westminster parliament an SNP spokesperson is entitled, nay required, to speak in these debates?  I am therefore perplexed as to why you do not even mention this possibility in your reply as that was what I asked for in my original letter.  Please let me know, in your reply, whether you are prepared to do so on this occasion.

One of the reasons why I voted in favour of Remaining in the EU [if you did!!] was that nature knows no boundaries. Scottish birds migrate through England, other parts of the UK and other parts of Europe, just as ‘English’ birds travel through Scotland.  Scottish birds’ future depends on what happens in England, and elsewhere, as well as what happens in Scotland. With the aid of modern technology, satellite tagging for example, we are now able to follow the routes of birds such as Hen Harriers raised in Scotland and see that they pass through grouse moor areas in northern England. If we do not get Defra to take wildlife crime seriously many Scottish birds will continue to be killed passing through England – the birds don’t recognise the border. The Westminster Hall debate is a useful opportunity to air these issues, including from a Scottish perspective, and I wish you, my MP, to represent my views there. There is nobody else I can ask – you are my Westminster MP, I don’t have another one.

I would like you to take the opportunity of the Westminster Hall debate to mention the fact that the Scottish Parliament has introduced vicarious liability for wildlife crime and to spell out what value that has been in warning large landowners that they are responsible for their employees’ actions.  I feel this would be a useful Scottish contribution to the debate and one that is most appropriately made by an SNP MP.

The tone of your response seems to me to be much too positively in favour of grouse shooting and the land owners that profit from it and carry it out. Why have you given two name-checks to Scottish Land and Estates and none to the views of conservation organisations in Scotland and in the wider UK?  I am concerned that the SNP is aligning itself with the cause of the problems and not looking hard enough for solutions.

The economic arguments for intensive grouse shooting are poor – they are exaggerated by the shooting industry (see http://www.league.org.uk/~/media/Files/LACS/Reference-material/4pp-Shooting-Briefing-paper.pdf  for the general argument but also, since you seem unaware of the details, for a particularly Scottish perspective read this http://www.league.org.uk/news-and-opinion/press-releases/2015/oct-15/whats-our-grouse) – and you are neglecting to take into account the damage to the environment through intensive heather burning and drainage. Heather burning reduces the hills’ ability to hold water and is likely to have added to the severity of the economically and socially damaging floods in northern England over the Christmas break but also those much closer to home in places like Ballater this spring.  And in any case, how much wildlife crime is the SNP prepared to accept?  The Cairngorms National Park is fast becoming as famous for dead wildlife as it is for live wildlife. In the last year there have been high profile media stories about Mountain Hare culls (legal but unnecessary and done largely by grouse shooting estates), illegally killed Hen Harriers and illegally set traps, and our national bird, the Golden Eagle, is not safe on grouse moors. National Parks in England, such as the Yorkshire Dales and North York Moors should also be regarded as massive crime scenes because they lack the birds of prey which ought to live there.

I am very disappointed with your reply. I would like to receive your attendance and voting record at Westminster and I would like a more accurate and considered response to my original letter to you.  I would also like your assurance that you will not send this inaccurate response to other constituents.  I look forward to hearing back from you soon.