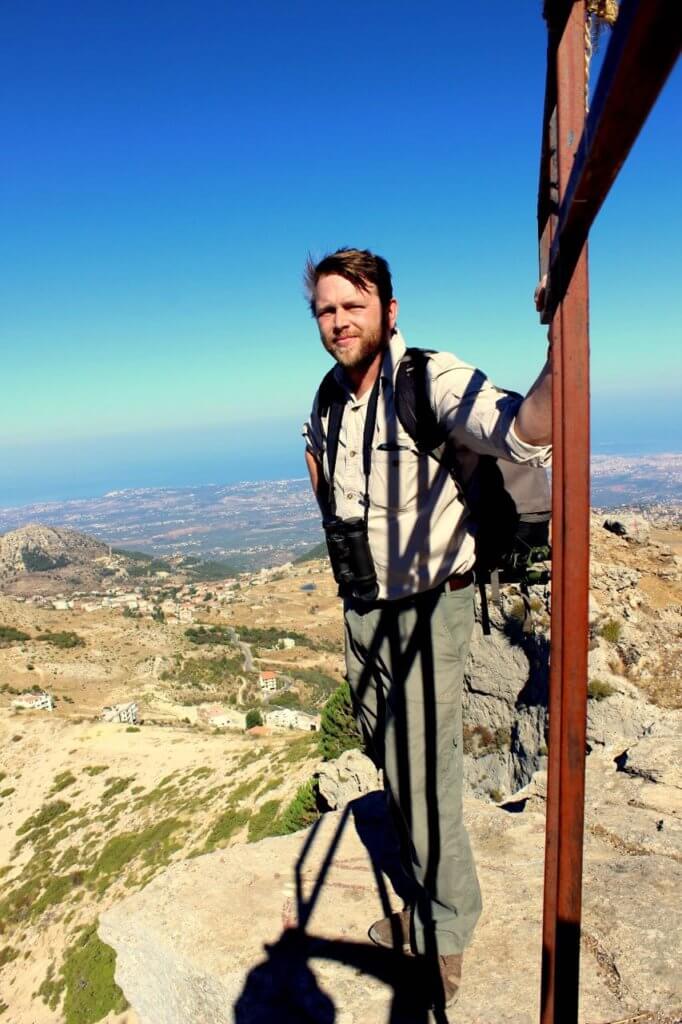 James (@JWTHogg) writes: I grew up on a farm on the edge of the North York Moors and have always been interested by nature and always wanted to be able to put a name to everything. Over the years this has grown to a love of birds and luckily circumstances have allowed me to travel around learning a bit more.

In 2012 my wife got a job in Rwanda for UK-DFID and off we went (very safe, excellent birding). Over four and a half years I learned a lot about the birds in that part of East Africa. We had two kids who I drag around swamps and forests. I organised a birding club for ex-pats and locals and tried to record all my findings, found a few rarities and I am the eBird reviewer for that country.

In Rwanda I worked on various things as a volunteer helping regional NGOs such as the ARCOS Network and also supported some wonderful guides from Nyungwe Forest National Park run bird watching clubs for children. Professionally I consulted on several projects with the Rwandan Government.

In August 2016 we all moved to Lebanon. The birding is maybe not as interesting, but the conservation challenges are much greater and that is what I want to tell you a little about here.

Murder on the African Express – hunting crimes in Lebanon

I’m sure some of you follow the work in Cyprus, Malta and elsewhere to try and stop illegal bird hunting. The problem in the Middle East gets less attention, probably because these countries are not in the EU and we have less influence. But it does exist and thankfully there are some devoted people trying to help. That is what I’d like to talk about here.

Lebanon is a funny place, somewhere I never thought I’d visit let alone live, but as the partner of an aid worker you follow the work. At times it seems to be everything at once, the best place, the worst place depending on your mood. It has a dangerous reputation, for the most part the troubles are in the past and if you stay in the right areas day to day it feels safe, the Lebanese in general are some of the friendliest, most generous and welcoming people I have ever met.

To say the politics are complicated would be an understatement; the state apparatus are small and dysfunctional. Money and connections can get you places. The private sector picks up where the state should be active and as a result somehow the country works. However, as a result of the weak state environmental protections, planning and waste management are either non-existent or not enforced. Lebanon is chaotic, vibrant, noisy and dirty (post brexit Britain?). Normally this would add up to a terrible place to live especially if you like a bit of peace and quiet, but for some reason I find it an intoxicating place. I realise this isn’t about birds, but it is useful context for later on.

Back on track. Lebanon lies on the Eastern Mediterranean migration flyway. It is the African Express route, where birds from across Northern Eurasia are funnelled through the narrow strip of land joining the Middle East to Africa. There are some forests, scrub and big cliffs, lots of different habitats. It should be a fantastic place to go birding.

Soon after I arrived I managed to track down the handful of local birdwatchers in the country and I was just in time to see the autumn migration. I was taken to some great spots on mountaintops and watched huge groups of raptors streaming past. Seeing birds migrate like this is something really special, if you have chance go and see it somewhere. That’s where the positives end for a while – sorry folks.

Sadly, it is impossible to go out birding without the subject of hunting coming up. I had learned a little about hunting in Lebanon before I arrived, though the reality is worse than I imagined.

I’ll try to quickly explain the size of the problem in Lebanon. Arguably exploiting migrant birds as a source of food has been going on for thousands of years and in the Middle East it is seen by some as a tradition, part of the culture. The modern world has however brought technology and an increasing demand that makes the hunting unsustainable.

Hunting is a year round activity, but peaks during the migration seasons. The country is about half the size of Wales with a population of around 4.5m (2010 estimate), on top of that there are around 2m displaced people and refugees from Syria, Iraq and Palestine.

Out of the 4.5m people around 600,000 identify themselves as hunters, which is close to 15% of the population! Estimates suggest around 600t of lead are shot in the country every year. Birdlife International in their paper “The Killing” put the number of birds killed per year at 2.6m. Everywhere you go outside the city people are hunting, there are piles of spent cartridges at the roadsides, and there is an almost constant rat-a-tat-tat of gunfire.  Even in protected areas you’ll find hunters and spent cartridges. Every conceivable method is used to gain an advantage, hunting roosting birds at night, using call recordings, 15 shot semi-automatic weapons, nets, birdlime and so on. It is merciless and the problem is truly huge for such a small country.

It is not just the number of birds killed it is the variety of species. Traditionally people hunted to eat what are described as simply “birds”; species such as Song and Mistle Thrushes, Blackcaps, Robins, Buntings, Chaffinches that kind of thing. Other birds such as Woodcock, Turtle Doves, Wood Pigeons and some Waterfowl are also shot for the pot. The unsustainable hunting of those species would be bad enough, but the shooting does not stop there and I have heard several people joke, “If it flies it dies”, someone will try to kill it and share the pictures on Facebook. Every variety of bird is shot for fun, Falcons, Kestrels, Sparrowhawks, Harriers, Kites, Eagles, Vultures and Owls, Pelicans, White and Black Storks, Golden Orioles, Cuckoos, Bee-Eaters and on and on and on. Early this year (2017) there was the slaughter of hundreds of seabirds around the airport in the interest of air safety. Shooters were given free cartridges and even paid per day.

There are plenty of photos on social media documenting all this. I’m not sharing any here as they are quite disturbing and get a bit depressing after a while. But if you want evidence have a look at “Stop Hunting Crimes in Lebanon” which is run by Committee Against Bird Slaughter (CABS) or any of the links below.

Amazingly, there are hunting laws (season, permitted species and bag limits) and even this year there is meant to be a total ban. But thanks to the small state there is little or no enforcement and the hunters even organised a protest against tighter controls. As 15% of the population they have a large lobby and significant business interests.

This all paints a very bleak picture and sadly it it is the reality. Birders and conservationists often feel like they are banging their heads against a brick wall. It is even quite hard to explain why you like watching birds as opposed to shooting them.

Back to something a little more positive. – Thankfully there are a few a groups who are fighting for change. Many are grass roots movements and it seems like more people are taking note and more people are doing their best for the environment. Most are volunteers and concerned individuals, brought together by Whatsapp Groups and Facebook. There are NGOs, though these are likely to be underfunded, who don’t have the same lobbying power as the UK and there is no handy petition system to force a debate. Occasionally there is some funding from an aid agency, but this is never enough and can’t really force the government to act.

These groups can’t take the place of the state to enforce laws, but they try their best to raise awareness, to change minds and advocate for hunters to act responsibly. They hope that eventually the state to take control of the situation, but don’t expect that any time soon. Members of these groups manage to get themselves on TV, the radio and in the papers regularly. They organise seminars for local officials to talk about controlling hunting locally and are encouraging the adoption of responsible hunting, knowing full well that a total ban is unworkable. Hopefully the message is getting through, and in a small way it is, recently a few hunters that have put down their shotguns and picked up a cameras instead. It is hoped that other hunters are more likely to listen to these guys as they can share a different perspective.

These groups and individuals also gather evidence from photos on social media, document wildlife crimes and try to name and shame individuals. I don’t always think it is helpful as insults get thrown around from time to time. So I am trying to formalise the way we comment on photos to provide some real data on legality and conservation status of any birds shot. Most hunters are unaware of the conservation status of these birds. Hopefully the more moderate will take note and spread some facts amongst their friends.

The groups hope to increase international awareness of the issue and recently wrote to AEWA about the problems and hope that some international pressure can be brought to bear on the situation.

It is in a way very similar to the work done by Mark and groups in the UK like Raptor Persecution Scotland, Birders Against Wildlife Crime and so on. Except here they have less general support and the problem is enormous.

I don’t think the groups here get enough praise. The Lebanon Eco Movement led by Paul Abi Rached, the Lebanese Bird Conservation Coalition led by Julie Liban and there is a local birdlife partner Society for the Protection of Nature in Lebanon. Roger Saad is a great advocate for birds and the pet trade in Goldfinches. There also are various facebook pages run by individuals like Dr Antoinne Faisal and Fouad Itani to showcase their photography and they use their pictures to raise awareness. Hunters like Samer Azar and Maher Rouhana who stand up in front of audiences and advocate for responsible hunting.  They are working hard to try and improve things in a country where most are not interested in listening. It is exhausting and thankless, but they fight on.

For my part I do what I can, share knowledge, draft documents, provide advice and on. These people, my colleagues inspire me to do more. I want to help these people who are doing what they can in the face of such a big problem. It will never be enough, but we always must try.

No matter where you are without these kinds of people we would be in a much worse state. A lot of us should be trying harder to change things for the better and if you want change do what you can to help. That might be supporting a charity financially or physically volunteering. You might have skills they need, it could be accounts, legal issues or waving a placard at a fracking site. Visit nature reserves to increase the footfall, let it be known you value nature. Write to your Council, MP and MEP, engage in local politics to raise the profile of your cause and don’t stop at signing a petition.