Guy Smith, vice-president of the National Farmers’ Union, said last week that farmers were at risk of being treated as “park keepers”, with Britain forced to increase its reliance on imported food. ‘If the only support mechanism that we get is for environmental delivery, we then become state paid park keepers,” he said. “My concern is where does that leave food?‘.

I quite often hear the ‘park-keeper’ phrase from farmers but it’s entirely inappropriate for the following reasons: 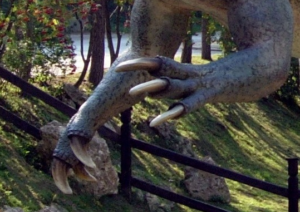 Let’s hope that Guy and his fellow dinosaurs find it difficult to pick up a pen or tap on a keyboard with those claws at the end of their short arms, otherwise we might their words embedded in the long-awaited Defra Farming Strategy.

The post-Brexit future of farming will be a big test of TM the PM, Andrea Leadsom and Defra. Hands up who is feeling confident that they will come up with the goods!  What – no-one?