Dr Therese Coffey is the junior minister at Defra. When Gavin Gamble’s e-petition in favour of banning driven grouse shooting passes 10,000 signatures (and it stands at over 9600) then Dr Coffey will need to sign off a government response.

In order that she does not make Defra look even more foolish than they do already I am providing a reading list for the minister to inform her response.

Notice the report has images of hen Harriers on its cover and that the UK account makes considerable mention of driven grouse shooting alongside other game management but doesn’t finger any other sector of society or the economy. It’s clear where the problem lies and it’s clear that it is a UK problem that is scandalous when set in a European context. 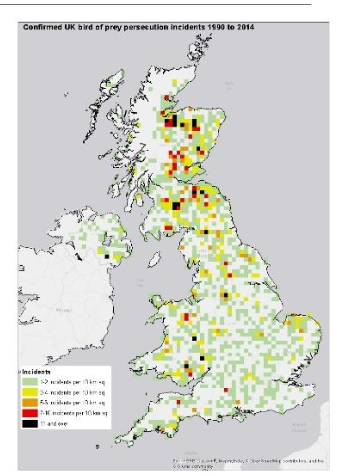 Here are some quotes from the report (I have highlighted some areas in red):

‘While the  problem  is  widespread,  it  is  particularly acute in areas associated with driven grouse shooting in the north of England and large parts of Scotland. Over a fifteen-year period (2000-2014) the five worst sites for the largest number of confirmed incidents were the Angus Glens in the north  east of  Scotland,  the Peak District  in  the  north  of England, South Lanarkshire and the Scottish Borders in the south of Scotland, and Aberfeldy in the north of Scotland.’

‘Retention  and  fully  implementing  the  legal protections  for wild birds enshrined in the Birds and Habitats Directives will be  essential  to  address  impacts  to  wild  birds  from  illegal killing in the UK. Raptor persecution was set as one of the UK governments wildlife crime priorities in 2009 but remains an ongoing problem. This can involve organised crime  and  a  higher  standard  of  statutory  enforcement  and  prevention  are  required,  with  more  effective structuring and targetting of this work. Industry self-regulation and voluntary schemes have repeatedly failed to  address the problems  of  raptor  persecution  in  the  UK  and  associated  wider  issues  of  damaging management affecting protected species and habitats. High values attributed to game birds via both shoot income and associated asset value of land and shooting rights present significant barriers to voluntary action.’

‘Existing sanctions have very limited deterrent effect, with high levels of recidivism and a lack of acountability for landowners and managers whose staff commit offences.‘

‘Regulatory interventions are required, including the introduction of a robust licensing system capable of governing driven grouse shooting. This should be supported  by  a  statutory  code  of  practice,  including  a  requirement  to  submit  bag  returns.  Legislation  in Scotland which has introduced ‘vicarious liability’, as a measure to increase accountability for the actions of staff  working  on  estates  should  be  extended  to  the  rest  of  the  UK.  There  also  needs  to  be  increased investment in monitoring, such as the use of satellite tagging, and improved recording of raptor persecution, and  enforcement.’

So Dr Coffey –  you are being told by everyone except the friends of the recidivists that you must do more. You have the chance to announce action to deal with wildlife crime on grouse moors in your response to Gavin Gamble’s e-petition to ban driven grouse shooting.  Are you, like your predecessors, going to pretend that there isn’t a problem here, and that even if there is, Defra is going to do nothing about it? We’ll soon see.  You are the one sitting in the hot seat.