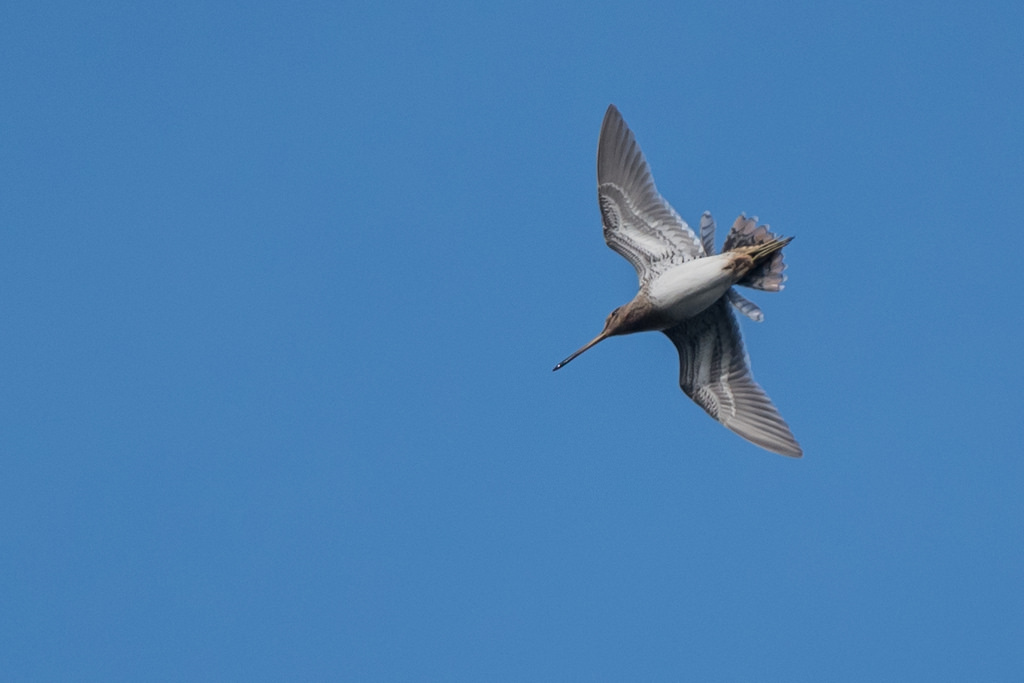 Tim writes: Snipe make a weird noise known as drumming, but it does not sound like a drum, more like a humming vibrato sound. During the early years of the twentieth century debate raged as to whether this sound was produced vocally or mechanically as wind rushed past the outer tail feathers.

The conundrum of how the sound was produced was finally laid to rest at a British Ornithologists Club dinner in 1931 when Sir Philip Manson-Bahr twirled a cork with snipe feathers on a string around his head and reproduced the humming sound. This was in the very public Pagani’s Restaurant in London and apparently the whole room resonated to the sound of a drumming Snipe. Others had suggested it was the tail feathers that produced the sound much earlier but it was Manson-Bahr’s theatrical demonstration that finally convinced all doubters.  So the humming noise is produced by air whizzing past the outer tail feathers but the vibrato is produced by the wings flapping and varying the air flow across the tail feathers.

Photographing a drumming Snipe is fiendishly difficult as they are usually very high, and they display over a large area.  Early mornings and late evenings in spring are when they drum most.  This is my most successful effort to date but it shows the stiff outer tail feathers spread wide as the Snipe tumbles through the air.

Other species of Snipe around the world also drum, but differences in the structure of the stiff outer tail feathers, and differences in the way the birds flaps its wings across the feathers, produces different sounds.  The closely related Wilson’s Snipe (Gallinago delicata) from North America was until recently considered to be the same species as the Snipe in Britain, but differences in the tail feathers and a different drumming display were part of the evidence for a taxonomic split.  I managed to photograph Wilson’s Snipe drumming and they clearly have two pairs of outer tail feathers splayed to make their different noise.  Not one pair like our British Snipe.