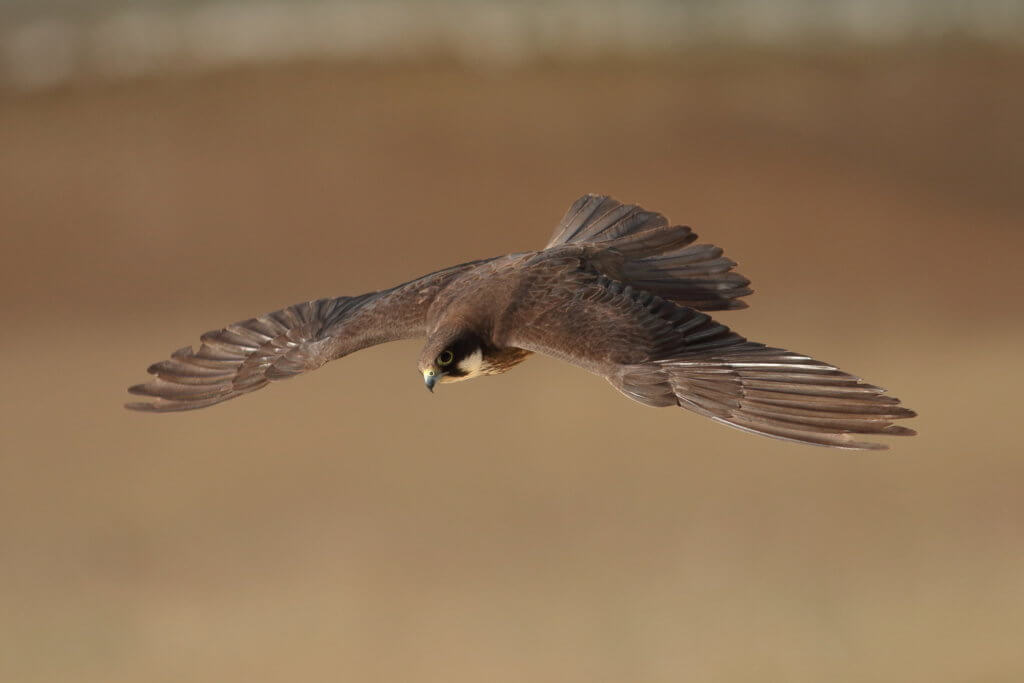 Eleonora’s falcon and a lady ahead of her time

In the last couple of years I have been working for the RSPB on Cyprus during the autumn to help the authorities deal with the large scale of trapping of migrant birds on one of the British military bases. Encouragingly the annual monitoring report produced this spring by BirdLife Cyprus showed that during autumn 2017 there was a massive trapping reduction of around 70% allowing hundreds of thousands of migrants to continue their onward journey to Africa.

So what has the Eleonora’s falcon got to do with all this – well nothing actually, but the picture was taken during autumn 2016 during a welcome break one Saturday morning from a pretty intensive period of work. This photograph was taken of a bird riding the coastal updraft towards my position on top of the cliff.

The Eleonora’s is one of the few falcon species that nests in colonies. I first went to the breeding colony on the gleaming white cliffs of Episkopi on the southern shore of Cyprus about ten years ago with colleagues from BirdLife Cyprus. This was during the busy breeding season and the exuberant and vocal behaviour of the birds, as they effortlessly tumbled around the skies, remains one of my birding highlights.

Eleonora’s falcon is a medium-sized elegant falcon, similar to the more familiar hobby. The species breeds on islands in the Mediterranean particularly off Greece, but also in Cyprus, the Canary Islands, Ibiza and off Spain, Italy, Croatia, Morocco and Algeria. This is a long-distance migrant, wintering in Madagascar, East Africa and the Mascarene Islands. This species has a fascinating delayed breeding season, raising its chicks in late summer. This is because it is a specialist hunter of migrating birds heading south through the Mediterranean islands at this time of year. So as well as an arduous physical journey, tired migrants also have to run the gauntlet of this astonishing aeronaut cruising along the coastal cliffs.

The Eleonora’s falcon (Falco eleonorae) is named after Eleanor of Arborea. She was the ‘juyghissa’ (female judge or Queen in Sardinian language) of the Sardinian Kingdom of Arborea from 1383. She was one of the last, most powerful and significant Sardinian judges, as well as the island’s most renowned heroine. She was also apparently interested in ornithology and in 1392, and believed to be the first time in history, she granted protection of birds’ nests against illegal hunters under the jurisdiction conferred by the Carta de Logu (a legal code). So it seems highly fitting for a lady so ahead of her time that such a special bird was named in her honour.