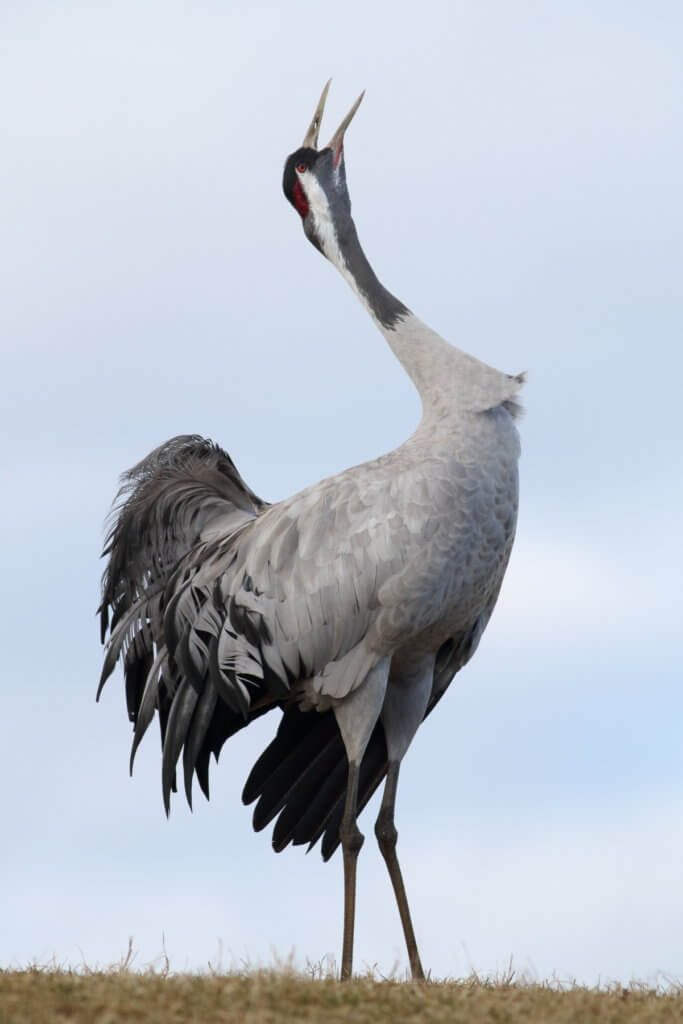 Cranes on the up

Guy writes: I still vividly remember in the mid 1980s seeing my very first common crane during a birding trip with friends to Norfolk.  Cranes had been lost as a UK breeding bird around 400 years ago as a result of hunting for food and the subsequent draining of their wetland nesting sites.  However, they returned in the late 1970s with a chick fledging in the Norfolk Broads in 1982.  There were just a few birds in those days and their whereabouts were somewhat shrouded in secrecy.  Wandering along a footpath near Horsey Mere, we suddenly had this huge bird flying close overhead.  Even now, having seen tens of thousands of birds at various sites around Europe, they still set the pulse racing.

In recent years, I’ve been on a couple of occasions in early spring to the staging ground at Hornborgasjön in southern central Sweden as the birds congregate on their way north to the breeding grounds.  With peak counts of around 20,000 birds the sight, and sound, of this spectacle is truly astonishing.  Birds also take the opportunity to court and dance – they really are the most graceful and beautiful birds.

There are also some rather cramped photographic hides available.  Arriving in the late evening, after a rather a chilly overnight sleep on the hide floor, at first light the action begins.  The ghostly shapes of the birds can be seen flying in from their roosting areas out on the lake to feed on the surrounding fields where grain is provided.  The birds are literally all around the hide, sometimes to within just a couple of metres.  The noise at this range can also be fairly intense!  Needless to say it provides great photographic opportunities; though trying to isolate individual birds sometimes needs a bit of patience.  Amongst many hundreds of images this is one of my favourites.

Since those early days in Norfolk, over the last 30 years the UK status of the crane has changed significantly for the better.  With a lot of conservation effort the population has grown and spread with small numbers of cranes now also regularly breeding in Cambridgeshire, Suffolk, Yorkshire and North East Scotland.  I always harbour a hope that I will one day add this to my Bedfordshire garden list.

Since 2010, the Great Crane Project, a partnership project involving WWT, RSPB and others has focused on the reintroduction of cranes into the Somerset Levels and Moors.  This has involved obtaining wild-sourced eggs from Germany and the careful hand-rearing of young birds in a purpose built rearing facility at the WWT Slimbridge Wetland Centre.  At around four months old the birds were transported to the RSPB’s West Sedgemoor Nature Reserve in Somerset and released after a short stay in pre-release enclosure.  Between 2010 and 2015, 93 common cranes were hand-reared to release – doubling the UK population, and helping to secure the future of the crane in the UK.

So after a long wait, thankfully the crane’s future in the UK seems a lot more secure.  Hopefully the development and improvement of wetland areas will continue to benefit these amazing birds and a whole range of other wildlife.