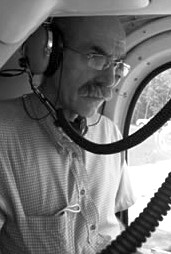 Although an ornithologist by training, Tim Reed has a background in monitoring and data quality- starting with standardising management planning and data recording for the statutory sector, moving on to developing the widely-used Common Standards site condition model.

After a long period introducing peer-reviewable data and biodiversity and ecosystem reporting models in big corporates around the world, Tim has spent the last few years working on data quality and the truly incredible material produced in support of development proposals in the UK.

Comments and issues appear regularly in his blog.

In the UK, planning applications are apparently an important part of the open democratic process. They allow consultation on proposals of local or wider interest. Documents normally include an assessment of the potential ecological impacts of a proposed development in a site-specific Preliminary Ecological Appraisal (PEA) or Ecological Impact Assessment (EcIA) or EIA.

This requires that the ecological risks, impacts, and opportunities in an application are clearly stated  and can be understood by planning authorities. Hence the material provided  should be robust (limitations stated, validated and understood), reliable and available. If not, the proposals cannot be assessed as fit for planning purposes.

Standard methods are recommended for use when surveying habitats, species, or species groups .As circumstances for undertaking surveys are rarely ideal, some assessment of problems associated with each visit, and their potential effect on the overall data sets, is needed. These are normally covered in the Limitations section.

As limitations affect the interpretation of data sets, and in deciding possible impacts,  you’d  expect that the Limitations section would be detailed and closely argued. And of course, any assessments would be substantiated, rather than authors just state they had no effect. Otherwise,  as the professional ecologists’ trade body CIEEM put it: it is opinion, unsupported by facts.

To get a handle on this, before retiring recently, I looked at the limitations sections in 33 planning applications sent to me in the day job, and tried to suss out on what basis ecological consultants were deciding there would be no impact from all 33 proposed developments. In particular, whether Limitations were recognised, addressed or really evaluated. Sites included large windfarm proposals, smaller single wind turbines, housing developments, pedal cycle routes and infrastructure plans, across England and Wales.

I looked to see if proper standard methods were used, and if the PEA or EcIA reports included a Limitations section. I also looked for substantiation behind conclusions of no impacts, or if decisions were solely based on Professional Judgement (PJ), and if that PJ was evidence-based or statistically tested, or just a feeling.

To cut a long story short, of the 33 sites, only 18 (54%) mentioned limitations and 15 didn’t. Those 18 all mentioned they used PJ. None of the 18 gave any credible basis for PJ-based decisions to ignore limitations – some of which were clearly affecting some data sets in a big way.

Does this matter? Yes, as Bill Sutherland and his team at Cambridge (Conservation Evidence https://www.conservationevidence.com).  put it: if data are collected, then it is critical that the robustness and probity of the data are understood. Otherwise, there is a risk that well-meant decisions and policies will be based on false premises

Its not as if none of those 33 authors didn’t know what to do – as they all cited survey standards. All of those standards have detailed sections that include things affecting data collection and interpretation: limitations.

Does it  really matter? If you claim a development will have no impact, then  the limitations of desk and field data need open discussion and evaluation, not what CIEEM calls unsubstantiated personal opinion. Given that only 10% of planners have any ecological qualification, and there are few ecologists available to cash-strapped councils, then planners are effectively reliant on the opinions of the applicant’s ecologists. If my sample of 33 cases is at all representative (and I have no reason to think it is not), the fact that limitations were either ignored totally in planning documents, or poo-pooed (with no statistical tests or validation to show why) when they were noted, is not at all encouraging.

What is needed is a scoring system that tells planners the extent to which data have been collected and evaluated according to standards, with limitations recognised and then  tested (ideally statistically) for effects, rather than relying on unsubstantiated PJ. Providing this would help raise the quality and reliability of documents provided to planners. It might slow down the process a bit, but if, as Boris Johnson says, we’re in a biodiversity crisis, then recognising an important area before you level it is pretty important. You might even decide to save it. It is no longer acceptable (if it ever was) to take the word (PJ) of a developer’s consultant, rather than provide properly tested limitations sections in planning applications.

Tim Reed has a paper in press that looks at the need for scoring systems for use by planners, and offers a simple method to help sift the wheat from the chaff.