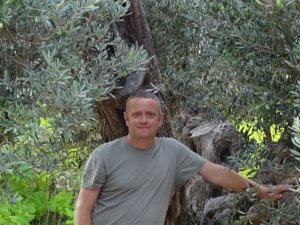 Ian Parsons spent twenty years as a ranger before running his own wildlife tour business. He now writes books and articles on wildlife.  He has contributed many articles to this blog (see here).

A forthcoming book, entitled Of the Trees and the Birds will be out later this year.

The recent shooting of five Goshawks and the subsequent dumping of them in Kings Forest in Suffolk has, rightly, upset and outraged many, many people. I am one of those people. I spent twenty years as a ranger with the Forestry Commission, and in that time I had the privilege of monitoring these amazing birds of prey, watching with satisfaction how, with protection, they have come back to so many parts of the country.

I started my time with the FC in what was then Thetford Forest District, a district that included Kings Forest. I can remember very clearly the excitement of being taken into an active Goshawk site by my manager, hearing the adult female shouting at us as we got near and seeing fleeting glances as she circled the canopy above us. It was by necessity a brief visit, a licenced check on the nest, but those brief moments are still as clear to me today, thirty one years later, as they were that evening when I relived my first ever Gos encounter in a phone conversation with a very jealous friend.

It was 1992, the Goshawk was extremely rare in England, a television program was in the production stages documenting these bird’s gradual recolonisation (I believe it was a Survival Special, I know it was entitled The Phantom of the Forest), people were beginning to publicly talk about these birds again. But it was a hushed talk. The secrecy surrounding the nest sites of these birds was incredible, it was a need to know basis within the district office and it had been determined that most people didn’t need to know. But as well as the secrecy, I also remember the pride. Everyone that knew about those birds felt enormous pride that they were where they were.

It is an all too common experience to read the brilliant blogs of Raptor Persecution UK and learn of yet more persecution of our natural heritage, shockingly it is no longer a shock to read them, such is the frequency of these crimes, but the recent blog detailing the five dead Goshawks in Kings was particularly galling for me, their bodies being dumped just a handful of miles away from where I first saw these magnificent birds. I monitored Goshawk elsewhere in my twenty years, I felt that same pride and the tremendous high of seeing nests I kept an eye on fledging young. I also felt the lows too. Losing birds to the moronic miniscule minority that feel they have the right to deprive the vast majority of us from experiencing the thrill of seeing these predators.

It is depressing, but I console myself with the truth. The morons have lost, Goshawks are back and their population is booming, from small numbers in 1992 to much larger ones now. Yes, the persecution of these birds still continues, but their overall population continues to recover. So in the last few days I have tried to ensure that I am thinking about that, thinking about the positives, but I have also been thinking about this, the main topic of this blog…

Those Goshawks were killed illegally, it was a crime. Those Goshawks were shot by a gun. Therefore, by a very straightforward process of logic and understanding of the English language, we can call what happened to those birds a gun crime. Except it wasn’t. Because in Britain, carrying out crimes with guns doesn’t necessarily make those crimes gun crime.

The Home Office is very careful about how it defines what makes a crime carried out with a gun a gun crime. They use a definition that limits what crimes, carried out with a gun, can actually be classed as gun crime, a definition that is useful if, say, you wanted to manage statistics that show crime levels. Now you might think I am being pedantic here, after all a crime is a crime no matter how it is labelled, but it does matter. Because how that crime is labelled dictates how it will be investigated and how it will be punished.

If I walked up the main road that runs through the village where I live carrying a loaded gun, that I legally own, and then discharged it into the air I would run the risk of a large police response, a well resourced investigation and charges laid against me under the Firearms Act. Charges that could result in a minimum jail term of five years. If I walked through a public open space (eg.moorland, forestry etc.), with the same legally owned loaded gun and then used it to kill a protected species of raptor, I may or may not get a police response, and if I did, the subsequent investigation would most likely be poorly resourced. If by some chance charges were laid against me, they would be under the various Wildlife Acts and the sentence I could receive would most likely be a small fine or even a conditional discharge.

One of the above crimes would be classed as gun crime, the other one not. Five years in prison is a deterrent. A small fine and a conditional discharge is not.

Maybe my grasp of the English language is not what I thought it was, but for me, a crime carried out with a gun is a gun crime. Simple.

Gun crime, as defined by the Home Office, is an absolute national police priority (and so it should be). Tremendous resources are thrown at combatting it, at ensuring that it is always thoroughly investigated and that appropriate punishments are handed down by the courts. If the Home Office’s grasp of the English language suddenly improved, and all crimes carried out with a gun were defined as gun crime, it would be a game changer in the protection of our natural heritage.

Whilst I think it would be great if everyone reading this contacted their MP to ask them to explain why a crime carried out with a gun isn’t a gun crime, I’m too cynical to believe that the Home Office’s definition will change any time soon. They are not going to want it to. Various Home Secretaries have always prided themselves in keeping gun crime at low levels – which is easier to do if you’re careful with your definitions. They don’t want the definition to change on their watch because if it did, the number of gun crimes officially recorded per year would suddenly shoot up. There would be questions raised in the House, the media would have a field day, reputations might get damaged etc. etc. But it is not just the politicians that would feel the heat, the police forces would too. Suddenly Chief Constables would find themselves under pressure from their Police Commissioners, from their MPs, from us, to explain this sudden rise in gun crime. Maybe I am being cynical, but I think that for the powers that be, it is far more comfortable to not record all crimes carried out with guns as gun crime.

But just because the Home Office employs a somewhat illogical definition of what constitutes a gun crime, it doesn’t mean that we have to. It is time for us to call these crimes what they are, they are wildlife crime, but they are also gun crime, they are crimes carried out with a gun.

On social media, in press releases, in interviews with the media, in articles we write, on blogs, in fact everywhere, we should call it as it is. A crime carried out with a gun is a gun crime. Calling it what it is will draw attention to the fact that criminal elements living amongst us are knowingly and wilfully using guns to commit crimes and then getting away with it (or ending up with mere judicial slaps of the wrist). Calling it what it is will no doubt provoke responses from certain sectors saying that it isn’t gun crime, but the simple answer to those remarks is ‘It is a crime committed with a gun, ergo it is a gun crime.’ If these people continue with their denial of this very easy to understand definition, then we should be publicly asking them why it is they don’t want these crimes committed with guns classified as gun crime. Are they afraid of the implications for themselves, or the people they represent, if crimes carried out with guns are called gun crime? Of course they are.

It is important for me to state that this is by no means a blog against the legal ownership of firearms or their legal use. It is a blog about us calling it for what it is, we mustn’t shy away from the very simple fact that a crime carried out with a gun is, by simple logic, a gun crime.