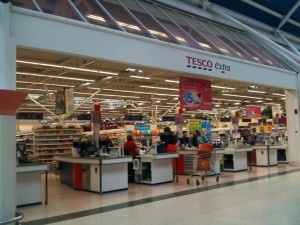 Last week the RSPB and Tesco  re-announced their link up on rainforests – you’ll find a description of the link-up in the most recent Birds magazine which arrived in mid-January (pages 22-23).

That link-up has already had an amazing impact on Tesco: looking at its 3-month share value you will find it peaked at 411p on 3  January (having been above 380p for the previous 5 weeks and maintained that sort of value until Birds was mailed out when it crashed to 312p on 16 January and hasn’t got above 335p since.

Apparently Tesco has recently been named the ‘top global retailer’ for its efforts to tackle climate change – it seems that 5 of its 5000 stores are zero-carbon.  But there have been other views about the UK’s largest supermarket chain (see here, here, here, here).

Quite how a link up with the RSPB caused Tesco to issue a profit-warning and lose £4,300,000,000 off its share price is beyond me but it’s a neat trick.  Whatever the RSPB is doing it is clearly working to rein in this megaretailer – and every little helps.

The Chancellor, George Osborne, might have said, ‘This is just another example of environmentalists,  and things like habitats, acting as a brake on the UK economy.  See – it’s not my cuts that are crippling the UK economy!  It’s the greens – look what the RSPB has done to Tesco already.  I am announcing  a review of any link-ups between mega-retailers and little charities to get to the bottom of this insidious impact.‘.

A spokesman for a wildlife conservation charity said ‘That makes as much sense as his review of the habitats regulations‘.

This blog may take a more serious look at this subject some time in the future.