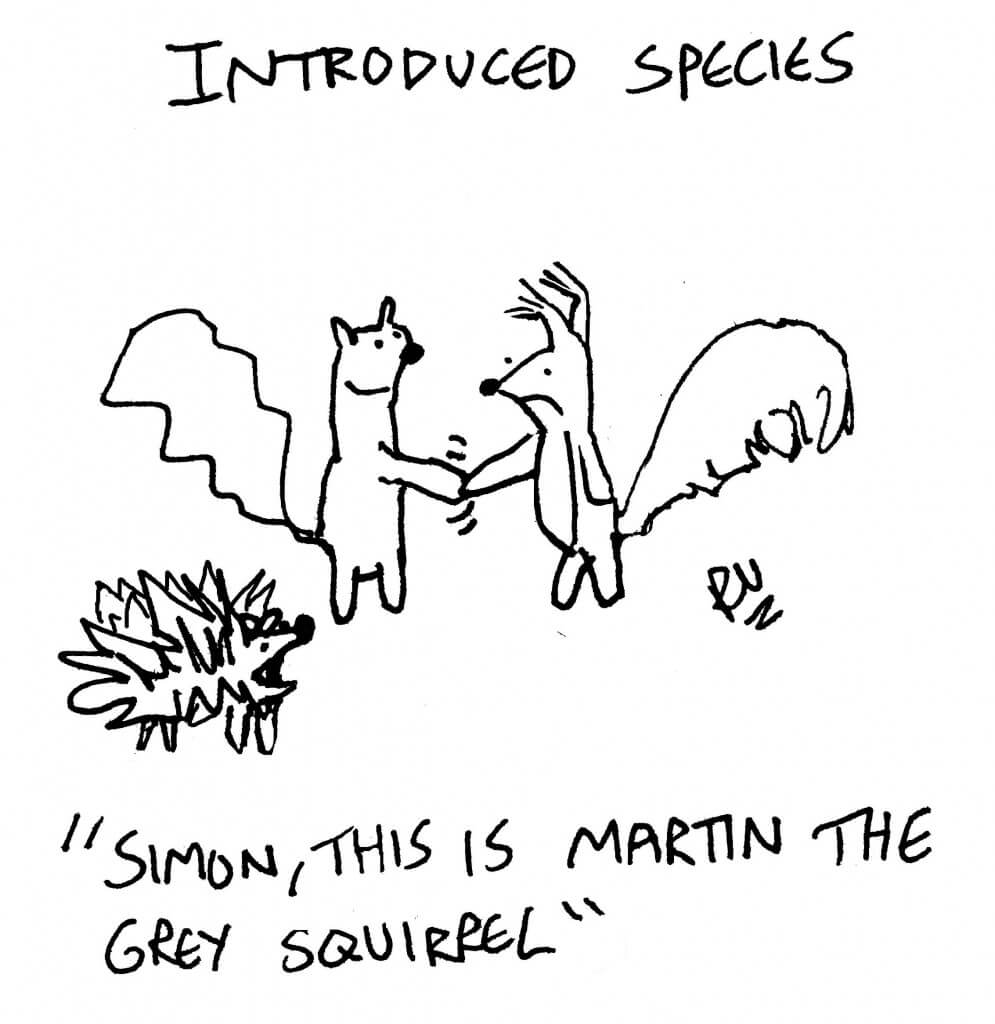 I think this is a great cartoon by Ralph Underhill.  A clever take on the word ‘introduced’ and great expressions on the faces of the grey and red squirrels.

Rather bizarrely the CLA issued a press release at the beginning of this week supporting Owen Paterson’s culling of grey squirrels on his land.  Well, there’s sucking up and there’s extreme sucking up, and this is the latter!

This was in response to a shocking article in the Daily Mail which described the Secretary of State for the Environment (and some other stuff) showing off a photograph of him holding up some traps with dead squirrels in them.  The most shocking aspect of the story was that Paterson was described as having been ‘tipped as a future Tory leader’.  Aaaaarghhhhhh!

Whoever gave that tip is either a genius or a fool (if any such person existed).  Betfair doesn’t list Paterson in a list of 47 potential bets on the next Tory leader which includes such unlikely wagers as Louise Bagshawe (84/1), and John Bercow (399/1).  But maybe we are thinking the Tory leader after that or even after that…

The grey squirrel seems to have been released into the UK by a Mr TV Brocklehurst in about 1876 – and he was a very naughty boy, but I’m pretty sure that he would have been a CLA member had they been around at the time.  In fact the CLA’s members are responsible for many of the introduced species that they are now so keen to cull.

As I wrote on Tuesday, I went looking for another introduced species on Tuesday evening; little owl.  I made my task quite difficult by wanting to see one as close to Lilford Hall (where they were successfully introduced) as possible. As I travelled the short distance to Lilford I passed an introduced muntjac deer and a reintroduced red kite.  I looked over the fence at Lilford Hall and saw a pair of introduced red-legged partridges on the drive.  There were introduced rabbits in the fields and introduced Canada geese by the river.  I failed in my quest to see a little owl.

I have a soft spot for little owls and I stand up for them even though they are an introduced species.  Little owls are an interesting introduced species because they are ‘near-native’ (if you like) since their natural geographic range extends to the other side of the English Channel – unlike the ring-necked parakeet, pheasant, ruddy duck etc  (and rl partridge either doesn’t or only just gets there depending on your point of view) which come from different continents.  This is the crucial point about introduced species – they are being introduced into fauna and flora with which they have not evolved and which have not evolved with them. Sometimes introduced species are benign but often they are not.  If anything will be, it will be a ‘near native’ introduction like the little owl.  But they can’t be doing much harm around here because I struggle to find them.  Of course it might be me!

21 Replies to “Re introduced species”