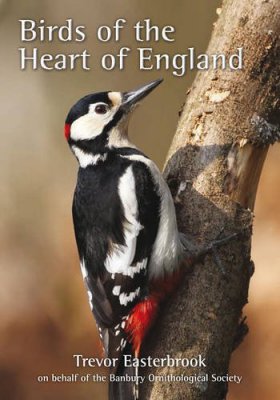 This volume is about the birds of 12 10-km squares in the middle of England, centred on Banbury.  The Banbury Ornithological Society was founded in 1952 and this volume is a very impressive record of their work (and play) over the last six decades.

I used to live in this area, and am ashamed to say that back then I played no part in the BOS’s studies.  My spring ring ousel record at Fawsley in the late 1970s or early 1980s (I really cannot remember – we didn’t have Birdtrack in those days) would have made it into this book!  I did see the rose-coloured starling in 1998 at Woodford Halse because it was just around the corner from my brother-in-law’s house – and a lovely adult it was too.

Generally speaking though, there aren’t a lot of rare birds to distract the birder from doing something useful with their spare time in this part of the world, and the BOS have certainly done that.

Their records from well-designed summer and winter surveys have produced trends and maps that illustrate the changes at the heart of of England’s birds.

The BTO (and others) Atlas will have similar trends and changes to those documented here, at England’s heart.

The return of the raven and red kite are beautifully demonstrated in this book, and the sad decline of the lesser spotted woodpecker and turtle dove too.

The graphs for pochard, peregrine, marsh tit, willow tit and whitethroat surprised me – you’ll have to see whether they would surprise you.

Any gripes? Not really, although I feel the photographs of birds are rather superfluous – they aren’t brilliant and they don’t add much, I feel.  And the graphs could be a little bigger – I like graphs!

Birds of the Heart of England, is published by Liverpool University Press and is available on Amazon as is Mark Avery’s book Fighting for Birds.

2 Replies to “Sunday Book review – Birds of the Heart of England, edited by Trevor Easterbrook”