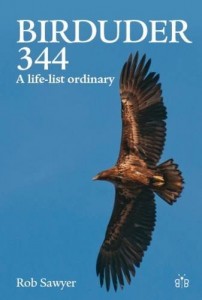 This book takes us through Rob Sawyer’s life and the birds he has seen, missed and misidentified.

The title refers to the fact that Sawyer regards himself as a cross between a ‘dude’ and a ‘birder’, and that his life list reached 344 species.

I don’t know Sawyer but he comes across as a reasonable type of a guy.  He and I are about the same age, both spent time at Cambridge University and have seen a similar number of bird species in the UK and even some of the same individual birds.  We may even have stood next to each other at some of the places mentioned in the book.  He writes with affection of birds, and with wry amusement at birding.

Despite all these reasons for liking this book I can only say that I liked it ‘a bit’.  Thousands of birders could have written a book like this one, and let’s be clear, most of those would not have been as good as this one, but it is an everyday story of one birding person and the birds he saw.  It’s a bit like seeing somebody’s holiday snaps, quite interesting for a while, but also a little like seeing the wedding photos of someone you don’t know – I began to wonder why I was supposed to be interested.

Don’t let me put you off, just because I liked it ‘a bit’ doesn’t mean that you won’t like it ‘a lot’.  I suspect that if you haven’t read Bill Oddie’s Little Black Bird Book and Mark Cocker’s Tales of A Tribe then you will find Sawyer’s book more of a revelation.  If you have just become hooked on birds then this book might build your enthusiasm.

Given that there are some similarities between this book and Scilly Birding reviewed here a few weeks ago, I would have to say that if I had to choose then I would go for the latter in preference to this offering as I think it is better written and more interesting (and cheaper).

Rob Sawyer seems like a person with whom it would be good to have a drink or two – I’d be happy to buy him a pint.

Birduder344 is published by Brambleby Books and is available on Amazon as is Mark Avery’s Fighting for Birds.