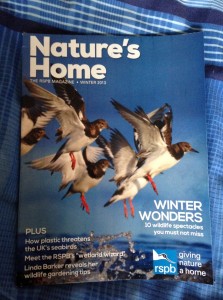 I’ve been told to expect good things from the first issue of Nature’s Home – the new name for the RSPB magazine. Mine arrived yesterday and I’ve enjoyed reading quite a lot of it already – more than I have for quite a few issues of the magazine.

I don’t like the name Nature’s Home, but we’ve done all that already; my prediction is that it will get another name change within five years, but we’ll see.

Some will mourn the uncluttered front cover of BIRDS; Nature’s Home looks more like a magazine that you might buy in a newsagent – but that doesn’t worry me much (there are so many places, these days, where we see marvellous images of wildlife).

When will we see the first cover without a bird on it, I wonder? Within the next three issues would be my guess – and I hope I’m right as it will seem a little odd if Nature’s Home always has a bird on its cover.

There are quite a few celebrities dotted around the magazine – Linda Barker,  David Lindo,  Simon King (and more depending on where you set the bar for ‘celebrity’) – but I most enjoyed the articles by Simon Barnes, Pat Thompson and Adam Marek.

Simon Barnes writes about the decline of Hen Harriers due to illegal persecution on grouse moors. It’s a good piece with which I agree.  In fact it echoes much of what I said at a meeting at the Royal Society on Monday evening about raptor persecution and the need to feel angry about environmental damage (and, I promise you, Simon and I hadn’t compared notes).  But Simon Barnes’s article does have a couple of snags; it isn’t written by the RSPB and it doesn’t say what the RSPB is doing about the issue.  To get closer to those  views one must read Pat Thompson’s article on the uplands.  Here, in a good, but rather short (considering the size of the issue) article, Pat writes ”In the long term, our uplands would be far better served by less intensive and damaging management, and in places, a shift away from the unsustainable practices associated with driven grouse shooting‘ but he also writes ‘Let’s be clear: the RSPB is not opposed to grouse shooting.’. There is talk of working together with the grouse shooting community but also that ‘shooting is poorly regulated, and self-regulation clearly isn’t working.  What we need are new laws that make the industry accountable for its actions.’.  It’s all a little bit cryptic but at least it’s being discussed in the RSPB magazine.  Hen Harrier persecution even gets a mention in the Chief Executive’s column where he says that we will read about the RSPB vision for the uplands in Pat’s piece – well, we don’t really.

At the RSPB AGM last Saturday Martin Harper said, in answer to a question, that the RSPB is in favour of vicarious liability for wildlife crimes, but the RSPB did not put any real effort into supporting the epetition on this subject last year, nor the current epetition on licensing of grouse moors.  Vicarious liability was adopted by the Scottish government partly on the basis of RSPB lobbying (and partly because they were at the time a sensible bunch of politicians) but the RSPB has been relying on internal advocacy to the Law Commission to get vicarious liability in England, and the interim Law Commission report (published this week) rules it out and instead goes for a softer option.  So what will the RSPB do now – and what does it look as though it has done?

What it has done, I believe, is create a vacuum into which others will step.  The RSPB is in danger of being side-lined on an issue that it should ‘own’.

But back to the excellent magazine.  Adam Marek’s interview with Graham Hirons is interesting and personal.  I remember visiting Graham in hospital after the road accident about which he talks in the magazine and wondering whether he would be able to resume work. But he did and his legacy includes some fantastic wetland sites as described in the magazine (but much more as well).  I thought that this was an excellent article – about a person who is a talented conservationist (and a friend of mine)  – which revealed some of the  details behind the headlines of nature conservation.

The new-style magazine looks cleaner and smarter.  It is easier to tell what is an advert and what isn’t.  Even the adverts look a little more interesting – maybe I’m just ageing into the category at which they are aimed! Even though the cover lacks as striking a photograph as in the past (though I like Turnstones very much) the ‘Photo of the issue’ really is the photo of this issue and is on pages 19-20 and is not of a bird.

There are a few things that still need doing to bring the magazine fully up to date.  Why not get rid of the book reviews? To review Feral in October in 32 words when it was out in May seems a little off the pace and the excellent Birds and People (published in July) gets a massive 69 words.  These snippets don’t do justice to the books nor their potential readers (though my publisher may strangle me for writing this!).

The current design does nothing for the Chief Executive column at the front (page 7). Mike Clarke’s photo looks as though he is trying to walk away from the page and the landscape photo used here is too small to make an impact. This piece is no longer the RSPB talking to government about what it should do and it isn’t clear what is its function these days. It’s a page which, arguably, has less visual impact than any other in the magazine – that’s not a nice thing to do to your Chief Executive!

The new magazine looks good. I like it (but I still prefer that of Butterfly Conservation).