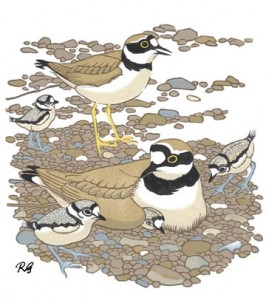 Yet another county avifauna piggybacking on the back of the BTO/BWI/SOC Atlas? Of course, and how lucky we are to be deluged with such a large number of these excellent works.

Some chap writes at the front of this book ‘Everyone, who has contributed to this splendid work, deserves the highest praise.’ and he is right.  It’s a very beautifully produced book, and much more than a list of birds of a long thin small English county (of 125,901 ha and 862,000 human souls) which runs along the Thames.

As a book it is large and attractive with many fine illustrations (including its Robert Gillmor cover) and photographs.  The maps are clear and helpful.  I liked the nice touch that on the graphs of monthly abundance the histograms are colour-coded so that winter months are blue, spring green, the summer months are yellow and autumn months turn brown – a nice (and actually helpful) touch which I have not seen elsewhere. There are other examples here that show the team producing the book gave considerable careful and original thought to its production.

As a non-resident of this county I greatly value the maps of good birding localities.  They  (in Chapter 5) are very clear and give enough information to go to them and see some birds at them – rather than spend all your time wondering where the ‘right’ bit of the site is.  Excellent!

Birdwatchers are never competitive but I, too, was quite impressed that this small urban county has amassed more bird species than its larger more rural neighbour Oxon – but who’s counting?

These county avifaunas tend to tell the details of the UK-wide stories of declining farmland birds, spreads of species due to climate change, strange losses of individual species and the spread of non-native species.  All of those are played out in this county and in these pages too.

However, I was struck by the graph of Wood Warbler numbers which does show the precipitous decline in numbers after the mid-1970s but, more interestingly to me, an equally impressive increase in numbers in the preceding three decades.

Many of the 862,000 inhabitants of this small county should buy this book and it was an occasional resident, Prince Philip, who wrote the words of praise I quoted above.  He also writes ‘ I have no doubt that future generations of bird-watchers will greatly value this book, and I hope it will help them, and all who are interested in the general conservation of nature, to encourage the introduction of measures, which will help to ensure that our rich ornithological legacy is maintained for the pleasure and instruction of future generations.’. It’s not that often that I feel of one mind with the royals but here I do.

This book is available from those who produced it at £35 +P&P.

1 Reply to “Sunday Book Review – The Birds of Berkshire by Bucknell et al.”