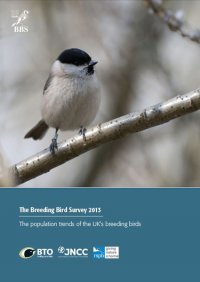 The most recent BBS report from the BTO, JNCC and RSPB isn’t very interesting. By which, I mean not a jot of criticism. It’s just that it seems to be telling me very much the same as last year’s report.

That’s what monitoring is like sometimes – nothing much changes. But that doesn’t mean that the work is any less important or valuable.  The BBS is something of which UK birders who collect the data, and the organisations who fund the scheme and analyse the data should be very proud.

And this year’s report has a very attractive Marsh Tit on the cover (and it’s ringed, I see).

So, nothing much to write about? Given that the area covered by the BBS may be splitting into two countries after a vote a week today it’s worth thinking about that a little.

The BBS is run by three UK organisations.  What happens to them if independence is the chosen option?  Nothing much for a year or two, I’m sure – but after that?

The UK has a population of 63 million – 5 million of whom live in Scotland.  That’s presumably roughly how the membership and funding splits too.

If Scotland goes, what will we call the remnants of the UK? The dUK (disunited) or lUK (less-united) or should we call Wales, Ireland (North) and England ‘WINE’? Where do you live – I live in WINE?

Since the BBS partners don’t cover the Republic of Ireland, north America, Calais or Normandy (all of which used to be a part of ‘our’ country), then presumably, eventually, the BBS wouldn’t cover Scotland either.

The BTO analysts have (rather arbitrarily I guess) decided on a cut-off of ’30 occupied BBS squares each year’ as the limit for which species have ‘enough’ data for a meaningful trend for any one of the UK’s constituent countries or English regions. For England as a whole there are 102 such species. Scotland has 62 qualifying species; Wales, 54; and Northern Ireland, 35.  But interestingly (it interested me), South East England has 67 qualifying species for which there are enough data to calculate a meaningful trend (and most other English regions have lists of species in the 50-61 range). These figures are a combination of how many species live in each area and how good the coverage is so they aren’t completely straight-forward to assess but they give some (light-hearted) support to the ‘better together’ camp.

As a result of exploring these issues I did spend rather longer looking at the tables for the constituent parts of the UK than usual. And, as with birding in general, a bit of sitting down and staring hard revealed that there was more going on than I had initially appreciated.

The list of species with ‘good enough’ coverage for the UK as  a whole (based, on at least 40 records each year (why 40 rather than 30 I don’t know)) is 110 species long. Remember, the list for England alone is 102. Can you guess what are the eight species which are added to the list by combining data from Wales, NI and Scotland to those from England?  They are likely to be relatively uncommon species with a tendency to live in the north and or west of Britain aren’t they?  Answers at bottom of this post.

But combining data from two different ends of the UK doesn’t necessarily make us, or our bird analysis, stronger or better. Take the Willow Warbler. Overall (the UK figures) there is pretty much no change in numbers over the period of the BBS (20 years) but in England there is a significant decline and in Scotland a significant increase.  We should value what makes us different, the ‘Yes’ camp might say.

Tables 2-7 ion the BBS report are worth having a look at. I’ve normally picked the one that interested me the most (either UK or England) and pretty much ignored the rest (how English of me?). But they repay a bit of thoughtful musing I think. Maybe particularly in the week running up to the vote on Scottish Indpendence (or WINE indpendence, depending on how you look at it).