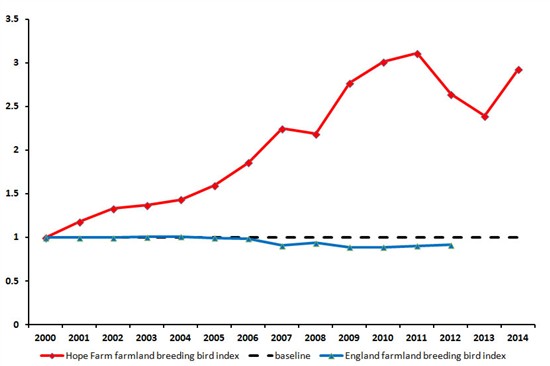 Every picture tells a story – and this one tells a big story.

This graph shows the farmland bird index at the RSPB’s Hope Farm and in England as a whole.

It shows a slow, steady decline in England altogether (blue line)  but a massive overall rise (red line) at Hope Farm. Read more about the Hope Farm experience here. I’m glad the ‘reds’ are on the up and up.

After a couple of years of falling bird numbers (partly weather-related – probably), the breeding population jumped up again this spring – that must have been a bit of a relief to all at Hope Farm.  When I called in at Hope Farm in July 2013 (there is a short account in the last chapter of A Message from Martha – because it relates to Turtle Doves) the folk there were a bit gloomy so I’m very glad that 2014 was a much better year.

Farmland birds, just like farmland crops, and farmland farmers, have good years and bad years – you mustn’t get too cocky in the good years nor too morose in the bad ones.  You can be judged as a farmer or as a conservationist by your record in the long run.

I was pleased to read that Skylarks were back up to 38 pairs as it is etched on my mind that when we (for at the time it was ‘we’) bought Hope Farm there were 10 pairs. I was hoping that we could get the numbers up to at least 20 but at the time I couldn’t have been sure that they wouldn’t fall to five!  Consistently getting over 30 pairs of Skylarks is a great achievement – but one that is open to many farmers across England through the funding available, from you and me, in agri-environment schemes.

We should soon see the UK figures for the index for last year – I wouldn’t be surprised if they went down a bit further (that’s what my eye-balling of the figures tells me) but we’ll have to wait about a whole year before the 2014 figures are available for the UK as a whole, or its constituent countries.

There is a pretty clear message here for Defra – mind the gap! It’s a chasm not a crack.

38 Replies to “Hope continues to rise”