I am a professor of Zoology at the University of Sheffield and a life-longer birder. I study reproduction – mainly infidelity in birds – and have kept a study of guillemots on Skomer Island going since the 1970s. I’m passionate about research and teaching undergraduates; I also enjoy communicating science to the public and have written a number of popular science books including The Wisdom of Birds (2008) and Bird Sense (2012). Together with three colleagues I founded New Networks for Nature in 2009, which runs an annual festival to celebrate the way nature inspires creativity among scientists, musicians, writers, poets and artists. I am married with three children and a dog.

It is almost a dirty word, but it needs to be done. Without monitoring we don’t know whether what we are trying to conserve is increasing, decreasing or stable. In many quarters, monitoring is held in such low esteem it is farmed out to poorly qualified personnel. Yet, this, the most fundamental feature of conservation.

Forty years ago there was concern about the UK’s seabird populations. Numbers were declining. Old photographs showed cliff tops covered in puffins where they no longer were, but there were no standardised census methods so it was difficult to assess the scale of a decline. What was known was that huge numbers of seabirds died in oiling incidents like the Torrey Canyon (1967); or in the more mysterious Irish Seabird Wreck (1969) which killed thousands of guillemots.

When I started my PhD on guillemots in 1973 we had virtually no idea how to count them or what the numbers meant if we could. We also had no idea how to measure breeding success or the timing of breeding. The first part of my PhD research was to rectify this, and fortunately it wasn’t too difficult. We now know that for every 100 guillemots on a cliff there is about 67 pairs; we also know the best time of day and of the breeding season to make counts.

We also know that there is more to monitoring than numbers. Measuring annual adult survival, by marking birds individually with colour rings and recording the proportion that return year on year, is a vital statistic of how the population is doing. It is a notch above counting individuals, because seabirds often behave in slightly mysterious ways. A repeated pattern following oiling incidents or wrecks in which we know from the body counts that huge numbers of birds have died, is that counts at the colony the following season show no decline or sometimes even an increase. How can that be? The answer is that the huge pool of non-breeding individuals, which for guillemots can be anywhere between 1 and 10 years of age – respond to that additional adult mortality by changing their behavior – and presumably spending more time at the colony. 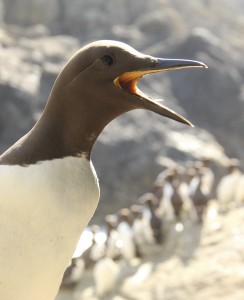 For the last forty years my colleagues and I have monitored guillemots on Skomer Island, Wales, one of southern Britain’s most important seabird colonies. Our monitoring has allowed us to follow the guillemot’s fortunes. My aims have been: (i) to understand how the population works: it has taken forty years but we know that now, and (ii) to continue to monitor the population so that if there is an environmental disaster, such a huge oil spill we are in the best possible position to know what its effects are.

Since the late 1980s guillemot monitoring on Skomer has been funded, modestly, but adequately at £12K pa by the Countryside Council for Wales (CCW). Sadly in 2013 that body was consumed by a new quango, Natural Resources Wales (NRW) who promptly terminated this funding. Their timing couldn’t have been worse for it coincided with one of the worst environmental seabird disasters for many years: a huge ‘wreck’ of 40,000 birds including many from Skomer. Ferocious and persistent storms – part of climate change – disrupted feeding and many birds starved to death.

I asked NRW to reconsider their decision. I organized a conference to demonstrate the value and necessity of robust monitoring, but NRW remained unmoved. Worse in way, they excused themselves by claiming that adequate monitoring of guillemots is already in place on Skomer. But in my opinion having seen it at first hand, this is rather like a faith-healer for guillemots, compared to the complete body scan they’ve thrown out.

Continuing the long-term study – the proper monitoring of guillemots on Skomer – is not about me, although of course I’d deeply committed to it. Rather, it is about a moral responsibility – surely the Welsh government’s responsibilty.

Monitoring is a not a tick-box exercise that than be performed by untrained and unsupervised volunteers or minimum-wage staff. If you really want to know how a population is performing you need to be confident about both the methodology and the results, otherwise it is a complete waste of everyone’s time.

With no official funding, I’m seeking unofficial support through crowdfunding, and the response so far has taken my breath away. If you feel like supporting this work you help will be greatly appreciated:

You might also consider reminding the Welsh Natural resources minister of his responsibilities. He is Carl Sargeant and he can be contacted by email: correspondence.carl.sargeant@wales.gsi.gov.uk 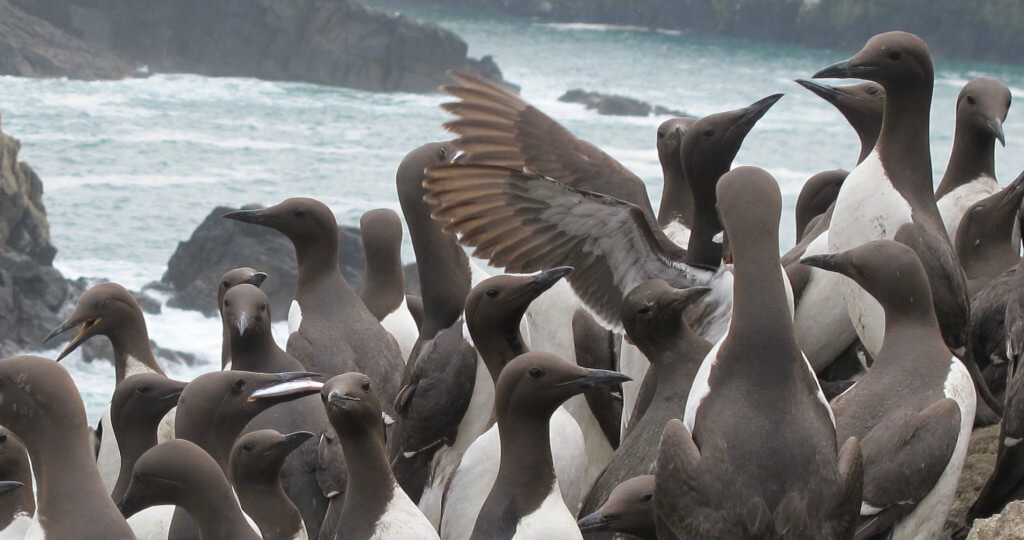