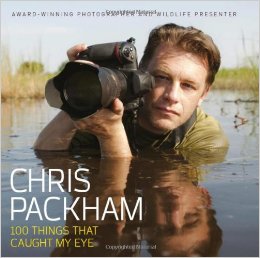 I’ve spent some time with Chris Packham this year. We both talked at the Hampshire Ornithological Society AGM on my birthday in March, and chatted about Hen Harriers on that day and wound each other up on the subject. We stood together as part of the ‘Sodden 570’ on Hen Harrier Day in the Peak District on 10 August and then spent time together at the Bird Fair the next weekend. We both spoke and agreed with each other at the World Land Trust Controversial Conservation event this year too.

So I can hardly be said to be unbiased about anything that Chris does but I can’t say that I know him well.  And so I thought I ought to buy his new book on photography and see what I could learn about him.

Now I am not that interested in photography – partly, I think, because my father was a keen amateur photographer of landscapes and buildings and that probably meant that I was bound to take another pathway.

When I see something amazing I want to look at it and see it, not look through the lens of a camera at it.  This is particularly true of nature where I don’t want some contraption getting between me and the nature.  I’ll always remember the sound of cameras clicking in Yellowstone NP as a Grizzly Bear with cubs came walking towards us. I could cut out the 200 people who were close to me but less easily the sound of 199 camera shutters whirring away. And I am getting tired of sitting in a bird hide and being deafened by the same noises – I’d vote for segregating hides, train style, into ‘quiet’ and ‘cameras and kids’ sections.

This book has 100 images from across the globe – all continents are represented except Australasia. Some are arresting images – a Monarch butterfly on a gun in Mexico, dead moths in a stream in Scotland and a grotty shack in Texas – and some didn’t do much for me. However, I am sure that your look through the book would find you stopping at different pages and for different reasons.

I found myself reading all of the accompanying text because where I liked an image the words made me like it even more and where it hadn’t done much for me, the words warmed me to the image and I understood more about why it had been taken.  Added to which, Chris tells a good story and has a great line in self-deprecation as far as photography is concerned.

The images contain more human nature than nature. And there is quite a lot of death in here too – the last resting places of people, moths, whales, prions, cows and trees as well as some dead buildings, dead cars and dead planes. But many of the people have smiles.

So, this isn’t a picture book. It’s an ideas book and a storybook – with pictures. At least that’s what it is to me. There’s a lot of Chris Packham in here – his views, his turn of phrase, too many photos of dogs, and a great eye for beauty.  And did I learn anything about Chris? I forgot to try to do that, because as with any good book, this one takes you somewhere and teaches you more about yourself.

Did I learn anything about photography? Definitely not – I am beyond that. One of the images I liked the best is apparently the worst in the book. Oh well! Not for me it wasn’t.

And I keep going back to that shack in Texas for the image and the story behind it.

100 things that Caught My Eye by Chris Packham is published by Blink Publishing.

Chris Packham said of A Message from Martha, by Mark Avery, ‘…this is a book that everyone who cares about the natural world must read now‘ which was very kind of him!