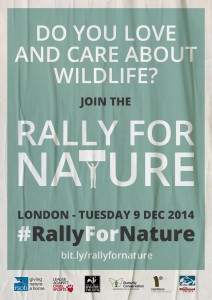 The responses coming in from your MPs don’t seem to be impressing you very much from what I see.

There is, as several people have mentioned, a standard Conservative response to our fairly standardised series of questions running up to the Rally for Nature.

It’s not surprising that the answer is a standard one, each individual MP can’t research every single issue that is raised by their constituents – if they did they would come up with all sorts of nonsense!

This is the Conservative response (variations on which I have seen from about half a dozen of you so far);

I am proud that this Government published the first Natural Environment White Paper for 20 years and established a proper strategy, Biodiversity 2020. I understand that £7.5 million has been provided to establish 12 Nature Improvement Areas, providing space for wildlife to thrive; 148,000 acres of priority habitats and 20,000 acres of woodland are also being created, plus another million trees planted in towns and cities. England’s woodland cover is expanding at a rate not seen since the fourteenth century.

Being outside in nature benefits people physically and mentally, so it is important too to protect access to the countryside. Our network of public rights of way plays an important role, so the Government is simplifying the process of recording them to ensure no historic rights of way are lost. Work is also ongoing with Natural England to establish the England Coast Path.

The Government’s vision for sustainable development, launched in February 2011, made clear that it must be ‘central to the way we make policy, run our buildings and purchase goods and services’. For the first time, all departmental business plans include actions that contribute to sustainable development, and tools and capabilities in this area are being embedded right across the Government.

And this is the Labour version – that I have seen only once so far (has anyone else got something similar – or different?):

I fully support the ultimate aim of the Act: the recovery of nature. A future Labour Government will work to secure that recovery.Our wildlife is facing unprecedented challenges from climate change and habitat loss. The RSPB¹s State of Nature report concluded that 60 per cent of the wildlife surveyed in the U.K. is in decline. I am deeply concerned that the Government is not doing enough to stop this wildlife loss and overcome the threats to our natural world. It is vital that politicians of all parties face up to this challenge of protecting our environment for future generations.David Cameron promised to lead the ‘Greenest Government Ever’ but instead his Government has set back efforts to protect Britain¹s wildlife and natural environment. The parliamentary Environmental Audit Committee recently published an environmental scorecard report, using a traffic light system to rate performance in each area. For its record on air pollution, biodiversity, and flooding and coastal protection, the Government received a red rating, meaning that these areas have deteriorated. In fact, in none of the ten areas assessed did the Government receive a green rating.Labour developed a new approach to environmental policy in government, based upon whole ecosystems rather than individual species or habitats. We commissioned the world’s first National Ecosystem Assessment, made a binding commitment to reverse the decline of biodiversity by 2020 and committed to make space for nature in every region of the UK. Unfortunately this Government has abandoned our approach.Government has a duty to protect our natural environment and wildlife so that all can enjoy them, including future generations. That’s why Labour first created our national parks, designated and protected areas of outstanding natural beauty, and opened up land for public access under the right to roam. It is why I have promised that a Labour Government will not sell off our public forests. It is also why we will change the remit of the Forestry Commission so that public money helps to secure the recovery of our natural environment in the next Parliament.

And what about other parties?

4 Replies to “You voted for them…”