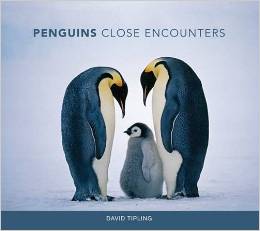 Did you like the John Lewis advert? That is what Christmas is all about after all – which retailer has the best advert to get you spending your money.

Which of the world’s 17 species of penguin was it?

I’ve never seen a penguin in the wild, only a few in zoos, but then very few of us have. But we ‘all’ know what penguins are don’t we? There was no danger that the John Lewis advert would get us all thinking ‘What is that mammal?’was there?

These birds captivate us. And one of the reasons is obviously that they are rather human-like – that’s why they work in adverts. They don’t fly, just like you don’t, and they walk everywhere, just like you do.  As a hard-bitten scientist and conservationist, and even as a man, I find it difficult not to go somewhat soppy over penguins. Aren’t they cute?!  Yes they are!

This book is a photographic celebration of penguins. It explores, in images, their cuteness but it is a very good record of their toughness too.   Living, many of them, in the coldest and driest and wildest places on Earth the penguins are as tough as they are cute.

The smooth lines and bold patterns, of mostly black and white, make the penguins very photogenic, and the fact that they can’t fly off and don’t sprint, and are in fact rather approachable and friendly in the wild (how cute is that?) makes them ideal subjects although the remoteness of their haunts is a bit of a drawback. Or, on the other hand, another great asset since the backdrops of snow and ice just add to the beauty of the images.

David Tipling says in the introduction ‘Never have I felt so alive in spirit or so vulnerable to death as the day I photographed Emperor Penguins during an Antarctic storm.‘.  I’m grateful that he took the risks so that he could take the photographs which I enjoyed so much, though I am a little envious that I can’t use such a brilliant line to introduce my own work.

The book contains words which tell you a lot of interesting things about penguins but you could easily enjoy this book very much without reading a word. Penguins really are amazing to look at, so feast your eyes.

There are some ugly penguins – the Royal Penguin wouldn’t win many prizes in a beauty contest. I can see why John Lewis chose an Adelie Penguin instead.

I think you should p-p-p-p-pick up this book as there is nothing wrong with cute.  Penguins are very beautiful and live in the most amazing places.

Penguins – close encounters by David Tipling is published by Bloomsbury.