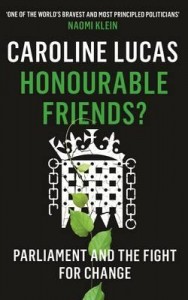 I was given this book as a birthday present and I’ve read it all now.

Caroline Lucas is a very admirable politician. I’m sure she has lots of faults, we all do, but if only we had a few more politicians like her then environmental matters would get a much fairer hearing in the Westminster parliament and the world would be a better place.

Caroline was voted environmental MP of the year on this website in 2013 and I suggested that Labour could court green votes if they pledged to make Caroline Lucas Secretary of State at Defra as part of an electoral pact. I’ve also written that I would be gutted if Caroline Lucas lost her seat of Brighton Pavilion to Labour on 7 May.

But what of this book?

If your politics are of the left then you may agree with much of the book, as I did, and that will help you to enjoy it all the more, but if you are not of the same political bent then you are still likely to find this a good read. What does a new MP make of the traditions and methods of working of the Houses of Parliament? How is a new, woman MP treated by the predominantly male sitting MPs?

There are plenty of home truths for Labour supporters – like me. Chapter 16 is a good place to start but throughout the book you may find yourself mentally ticking off the agreements with Lucas even when she is criticising Labour.

This isn’t a book just about environmental matters, but you’ll find more about badger culls, climate change, fracking and bees than in most books on politics.  Lucas knows her stuff and zips through the issues quickly, lightly but deftly. She covers a lot of ground in this book.

But the book covers all political issues and the last third or so suggests some solutions to our current problems too. A primary solution suggested in the book is to vote Green and if I lived in Lucas’s constituency then I most certainly would.

If you are going to vote on 7 May, and I do hope you do (however you cast your vote) then reading this book won’t do you any harm at all. It is a refreshing, wide-ranging commentary on our political system, its faults, the vested interests involved and the prospects for a more radical, fairer and better future. It’s not heavy – it’s quite fun actually. It’s obviously written from the heart but also from a wise head.

An index would have helped!

Honourable friends: parliament and the fight for change by Caroline Lucas is published by Portobello Books.