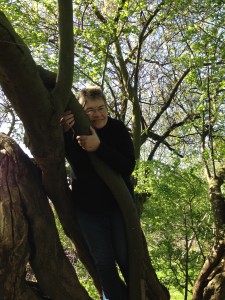 A child of nature going back to it in my dotage and, hopefully, becoming feral. Volunteer for a few conservation organisations; trying to find a ‘patch’ (can it be a sea wall, or a park?); writing a book about psychological benefits of being in nature; doing an MA in Nature Writing; maintaining a blog at http://daphnegoeswildindevon.blogspot.co.uk; and generally irritating friends and family with nature talk.

Reading Mark’s blog about Spurn Point reminded me of two recent visits. Spurn is a special place for me: first visited as a child on a school trip, and forever haunted by its wildness and beauty. I took my own children there a few times when we lived near Withernsea, and as a teacher at ‘With’ high school, I remember times when a few children could not get into school because the road at the narrowest part of the spit had been breached. Now, of course, no families live on the spit, and after the 2013 storm surges, only authorised off-road vehicles can use what’s left of the road.

A few years ago, when I was travelling about in a campervan on a pilgrimage to places in nature I remembered from childhood – and when you could still access the spit -I stayed overnight there, parked up next to the old lighthouse. You were not supposed to overnight on the reserve itself, and although hidden away behind bushes, I felt very nervous. I did not sleep at all and spent most of the balmy moonlit night sitting outside, not understanding at all (at the time – a little wiser now!) the huge amount of bird activity. I could hear and half-see what seemed like hundreds of small birds flying overhead and flitting around in the bushes. It was late April time, and I guessed birds would be busy nesting, but I expected them to be tucked up asleep and I knew little then about the extent of migration and the important part Spurn plays in that. Even back in the van, trying to get some sleep and with the door open, there was a constant symphony of bird noise. Sometimes, now, I wish I’d realised what I was in the midst of, yet I’m glad I had that experience as it was: at the time, I thought I was hallucinating from anxiety and lack of sleep!

Late last summer, I visited again, in van II. I was blogging for Yorkshire Wildlife Trust about visits to their reserves, and again it was a glorious afternoon. I had a wonderful walk – there were few people about (always a bonus for my misanthropic self!) and as ever, even in full sunshine, I experienced that mysterious wildness of the place: the bizarre juxtapositioning of ocean and river, silence and sound, sand and stone, war and peace.

I found two beautiful fossil stones – one on my desk now as I write – and I sat for a while watching a lone Avocet swishbilling its way through some brackish water. At the end of the afternoon I was lucky enough to get in on a Spurn Bird Observatory group doing some ringing of swifts which feed in large numbers on the spit. I was able to see a juvenile swift, very close up and personal when the ringer was handling it, and wonder yet again at the incredible fragility-with-strength of these tiny creatures in their daily struggles. My not knowing where I would sleep that night seemed minor in comparison.

Intellectually, I can appreciate the reasons for the future developments at Spurn Point, but I feel that for me, some of its eccentric wildness will be lost. We have so few of such places in Britain.