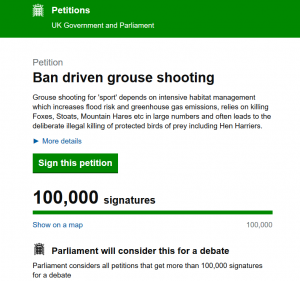 I wrote to the HoC Petitions Committee to find out as much as I could about when our expected debate might take place.  Here is their (very rapid) reply:

Thank you for your message. We are always here, even in the depths of August!

The petition will be considered for debate when the Committee next meets, on Tuesday 6 September. The Committee has the power to schedule debates in Westminster Hall on Monday afternoons, from 4.30pm. The slot on Monday 12 September is already taken.

The next available Monday is when the House returns from the conference recess, on 10 October. There are several petitions waiting for a slot for debate, of which yours is the most recent to pass the threshold. You can see the full list here.

Of these, you will see that two already have dates for debate in September. I’m afraid that I can’t give you a very clear idea yet of when the Committee might choose to schedule your petition for debate, since that will depend on the decisions the Committee takes on the other petitions and, to a lesser extent, on the availability of the MP who volunteers to lead the debate.

We will be in touch after the meeting on 6 September with more information – either on the Tuesday evening or the Wednesday morning. We tend to wait until we have some more concrete information before contacting petitioners – as you can see, at this stage we aren’t able to give any very helpful indications. The Committee is conscious that members of the public need to plan for attending debates, and does always try to give as much notice as possible.  In this case, the date will be agreed with at least a month’s notice, and probably more than that.

So, we should hear whether and when we will get a debate on 6 or 7 September. The debate, if we get one, will be on a Monday on, or more likely after, 10 October and in the late afternoon.  I know it is a long slog for many people, but if you signed the e-petition and want to come along then I hope you will. We could have a party afterwards! The Palace of Westminster is a fine building – it’s your parliament and you have a right to see what is going on in it.  I am very confident that if we get a debate, the committee will need to book a bigger room than usual to accommodate those people wishing to attend and to watch.

Please sign this e-petition to ban driven grouse shooting – it has already passed 110,000 signatures so should be debated in parliament.