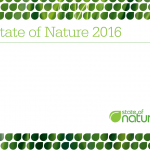 The UK is ‘one of the most nature-depleted countries on Earth’ was one of the headlines that the media took away from the State of Nature report. This sounded new and worrying to me, although entirely believable, so I was interested to see the evidence on which it is based. You’ll find that on pp 70-71 of the report.

This striking statement, which appeared widely in the media, and was talked about at the launch (by people who didn’t know where it came from) is based on taking the long view and assessing how much of a nation’s land area is covered with natural habitats. Since we cut down our forests a long time ago and continue to pour concrete over the rest of the country the UK has, in fact, the 29th lowest Biodiversity Intactness Index on Earth (and Wales does better than the rest of us, and NI is worst of the four UK countries, apparently). This is all very rough and not-so-ready for policy use it seems to me. Take a look at the map of BII for the UK on p70 of State of Nature and you will find, unless my eyes deceive me, that Kielder Forest is one of the places where you might find a lot biodiversity intactness in this country and it’s rather better for biodiversity intactness than the New Forest. Now, there are many good things to be said about Kielder’s massive conifer plantations as far as wildlife is concerned but it isn’t the place where you go to find the most intact biodiversity in the UK, I would suggest.

It’s a good job that the NFU doesn’t really engage with data otherwise they’ll be pointing out that it might be rather difficult to get our BII up very quickly and that there might be some implications of trying to do so. But the farming lobby is a data-blind bunch so they can be relied upon not to engage in this way.  There is a bigger chance that someone in the Forestry Commission will have noticed this map, but they are far too sensible to suggest that the solution to the Secretary of State’s desire for biodiversity is to make the New Forest more like Thetford Forest and Kielder Forest.

I bet you want to know which are the 28 countries on Earth that have trashed their biodiversity more than we have, don’t you? So do I, but they are in a scientific paper which is not yet on public view so I can’t reveal all.  Would you guess that the Netherlands and Japan might be ahead of us in losing their intactness? I’m not sure but I am a bit intrigued.

We have, it is true, trashed our biodiversity. One of the signs of lack of intactness of our biodiversity is the lack of top predators, both mammals and birds. Over much of western Europe large mammals and large birds of prey had a tough time at the hands of farmers and shooting interests with, very roughly, their populations reaching a trough in the 1970s. Over much of Europe they are coming back: walking back in the case of wolves and flying back in the case of eagles, and increasing in numbers because of better protection and sometimes reintroductions in the case of other species.

Wolves have strolled back into the Netherlands, Belgium and Denmark although they aren’t yet established in those countries but in neighbouring France and Germany they are (and see here – free access but requires registration). White-tailed Eagles have spread back to the Netherlands too.

An index of loss of top predators from a country might be an interesting measure of biodiversity intactness. We’d not do too well on that index either.

A solution to this nature-deficiency would be to create much larger areas of much wilder land – our National Parks (very low scores on the BII map and very low on ‘my’ TPII (Top Predator Intactness Index) might be a good place to start.  Where are the bold initiatives from government? Where are the bold challenges from the NGOs?