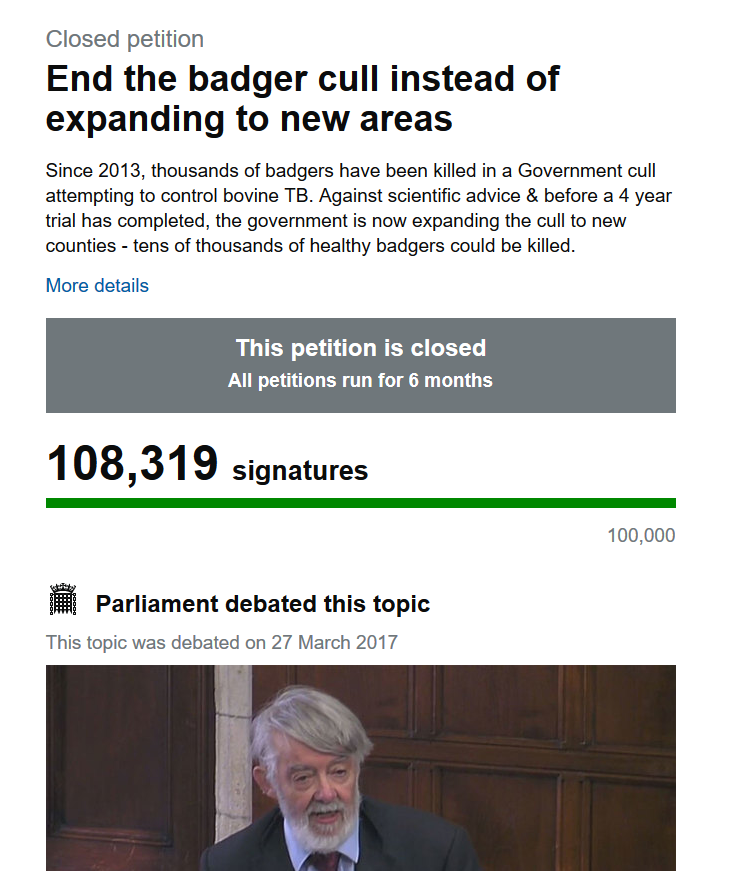 I listened to all of Monday’s badger cull debate.  It was a far better discussion than the previous one on badgers and infinitely better than the one on banning driven grouse shooting.

Better though it was, it is interesting to see and listen to politicians debating science as those involved in the debate could not possibly be regarded as experts on the subject. I was particularly struck by the paucity of ecological understanding emanating from Richard Drax (Harrow, Sandhurst and The Coldstream Guards) who seems to think that Badgers are hoovering up Wood Warblers. ‘Those are the facts’ said Mr Drax presumably on the basis of his long term study of predator-prey relationships. It’s easy to mock – indeed, very easy when an MP spouts such ill-informed nonsense.

Paul Flynn introduced the subject of the debate with passion and a pretty good grasp of the evidence.

Sue Hayman did OK as the Labour spokesperson and she was ably helped by Rachael Maskell and Angela Smith. Angela Smith in particular made a forceful contribution highlighting the government’s move away from a science-based approach – do read what she said in the transcript.

Geoffrey Clifton-Brown was more sensible than usual, I thought, although he has set a low baseline of expectation and always reacts very badly to challenge.  When he agreed with his colleague Mr Drax,  or Richard Grosvenor Plunkett-Ernle-Erle-Drax as perhaps we ought to call him, about the impacts of the Badger on ground-nesting birds, and was challenged for the source of his knowledge he reverted to the ‘I live in the countryside you know’ argument and said ‘Well, the source is evident to any countryman out there’ and, obviously, that should be an end to it. Be off you scientific townies or I’ll give you a good horse whipping!

If you were an optimist, then there were some signs, just signs, that the government was being nudged to a slightly more sensible position through this process. There was far less stridency and a bit more common ground. Maybe. Perhaps.

This debate won’t have done any harm at all and several MPs rightly praised Simon King for getting so many signatures (108, 319) on such a subject.

I do wonder whether MPs ever get much feedback on their performance in these and other debates. If your MP took part then you could tell them what you thought of them. But it would be fascinating to see an independent panel of scientists comment on the speeches. I wonder what Lord Krebs and Rosie Woodroffe, for example, thought of the debate?