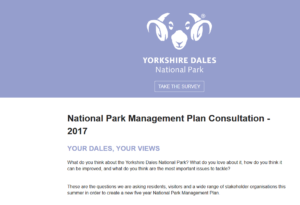 English National Parks in the uplands, particularly the Yorkshire Dales NP, Peak District NP and North Yorks Moors NP (and while we are at it the Nidderdale AONB, Forest of Bowland AONB and North Pennines AONB) are being forced by public pressure to address the issues of wildlife crime and raptor persecution in their areas.

Both the Peak District NP and Yorkshire Dales NP have consulted the public on their priorities for their next five years and been told that they need to address wildlife crime. I’ll come back to the Peak District tomorrow.

Having been told by the public that their consultation on future management was complacent on the subject of wildlife crime and its link to driven grouse shooting, The Yorkshire Dales NP (through whose area I travelled on Saturday and Sunday) are now responding.  Public opinion influences public bodies who are spending public money – that’s how it works.

The Yorkshire Dales NP has now published the results of the ‘Your Dales’ consultation.  Not surprisingly, landscape and scenery topped the list of ‘likes’ by respondents.  I agree – even in the heavy showers this weekend, the scenery was impressive.  Wildlife came second on the list of ‘likes’ and so it should, although it would score a lot higher with many of us were there rather more of it! A rainy weekend in September doesn’t provide the best conditions for wildlife-watching but it was noticeable that there were lots of Kestrels and Meadow Pipits, oh yes, and Red Grouse, but not a lot else although the rather sodden Short-eared Owl looked miserable but handsome.

But when it comes to identifying the areas for improvement, non-residents (ie visitors and taxpayers who maintain the economy of the National Park) put ‘Wildlife conservation and enhancement, tackling bird of prey persecution’ at the top of their list.  And when it came to identifying the areas which need tackling over the next three years non-residents identified ‘Wildlife protection and enhancement’ as the top issue and ‘Raptor persecution/birds of prey’ as fourth in the list (although there must be a high probability that those saying the first also meant the latter).

Wildlife crime gets a special mention in the short report as follows:

‘Wildlife crime/birds of prey/raptor persecution
This was an issue raised by both residents and non residents. The strength of this response, particularly from visitors, reflects the high profile this issue is currently receiving locally and in the wider media. It is evident that there has been some campaigning about this specific issue. There are some very negative comments and strong concern about the harm it may be causing to the reputation of the National Park. Blame is laid at the door of certain land management practices around grouse shooting. Suggestions for tackling it include; increased monitoring, use of volunteers, licencing or even banning grouse shooting.’
Well, that suggests the message is getting through and we now need to see how the National Park Authority responds to these real issues.  They are in a difficult position since the NPA does not have that many powers. But here’s a suggestion – why not employ National Park nature rangers whose job it is to monitor wildlife in the National Park, including birds of prey. Ask all landowners within the National Park (and adjacent Nidderdale AONB) , especially grouse moor owners, for permission to survey their land, and ensure that the access permission covers the right to film events and to place monitoring cameras without seeking further landowner permission. Publish the names of all estates asked in two lists: those who gave permission and those who did not.
Who knows, a bit of filming in this wildlife crime hotspot might provide some interesting footage – maybe even a bit like this, filmed adjacent to the Cairngorms National Park and now having reached 18,400 views on YouTube.
Thank you to any readers of this blog who responded to the YDNP consultation.  It didn’t take you very long and you have helped move things along a little already.
More on the Yorkshire Dales NP later today.
Likes