Back on 1 October I asked NE some questions. They asked for extra time to answer them and I had a response yesterday afternoon.

The questions related to an excellent NE publication of 2008 entitled ‘A future for hen harriers in England?’ which it is well worth having a good look at, and asking yourself whether you have seen any similar publication from NE on their continuing study in the last 9 years (hint – you haven’t!).

Here is the response. 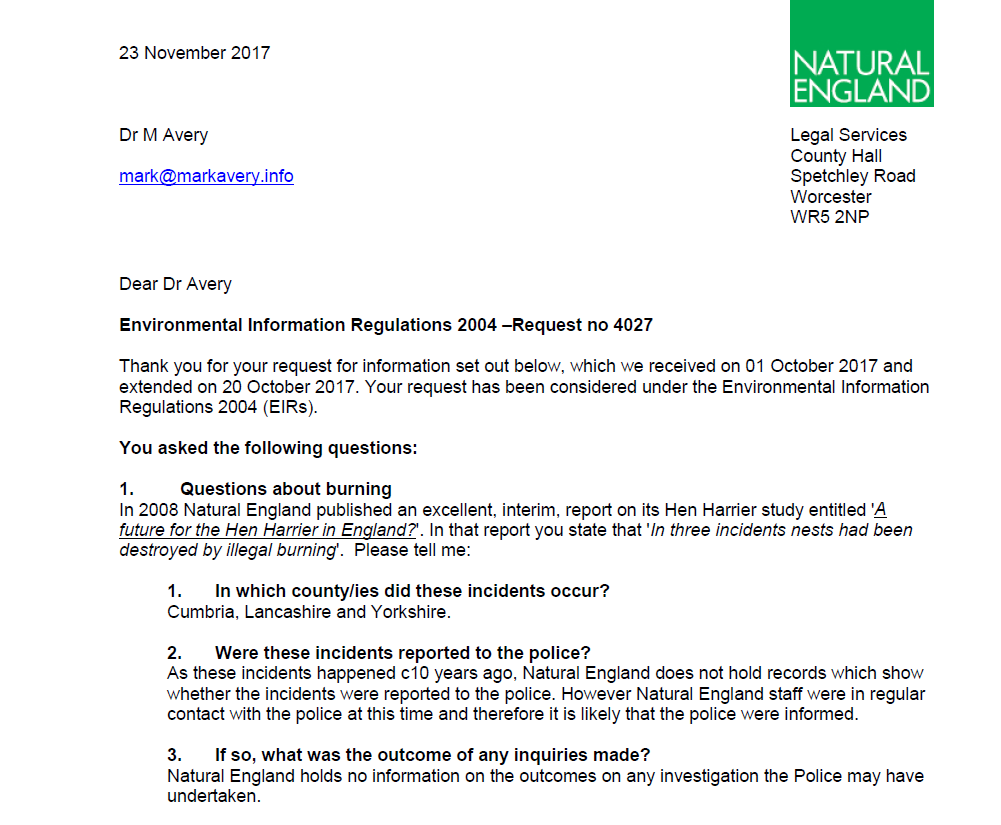 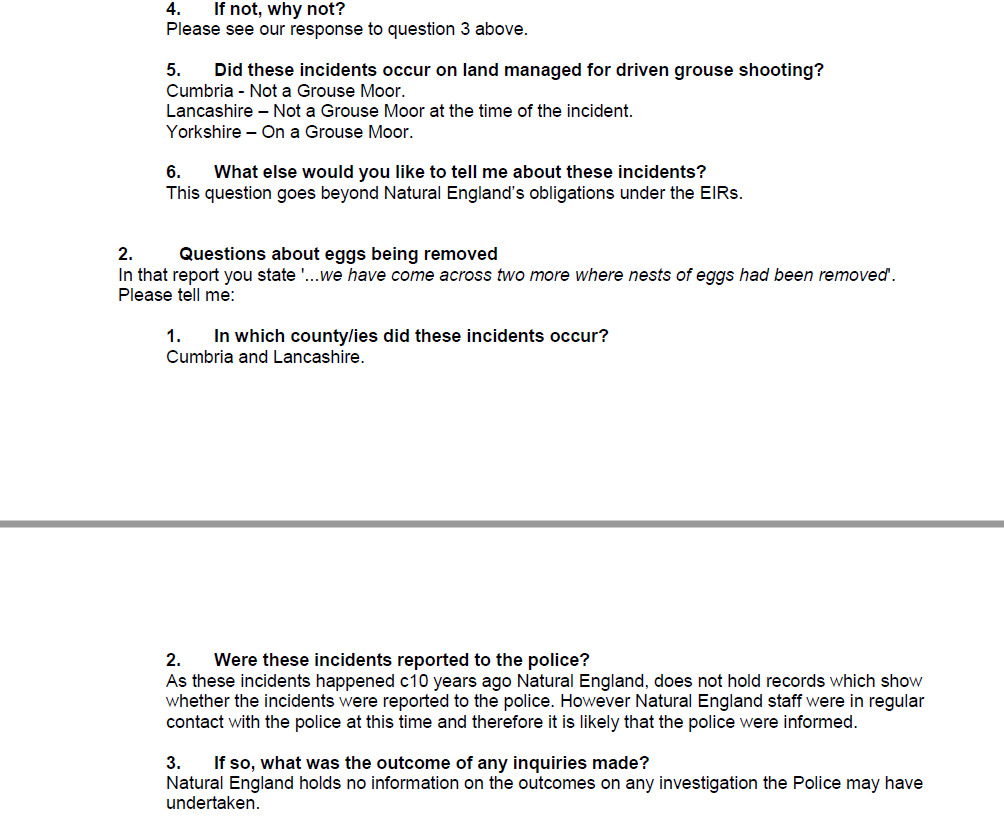 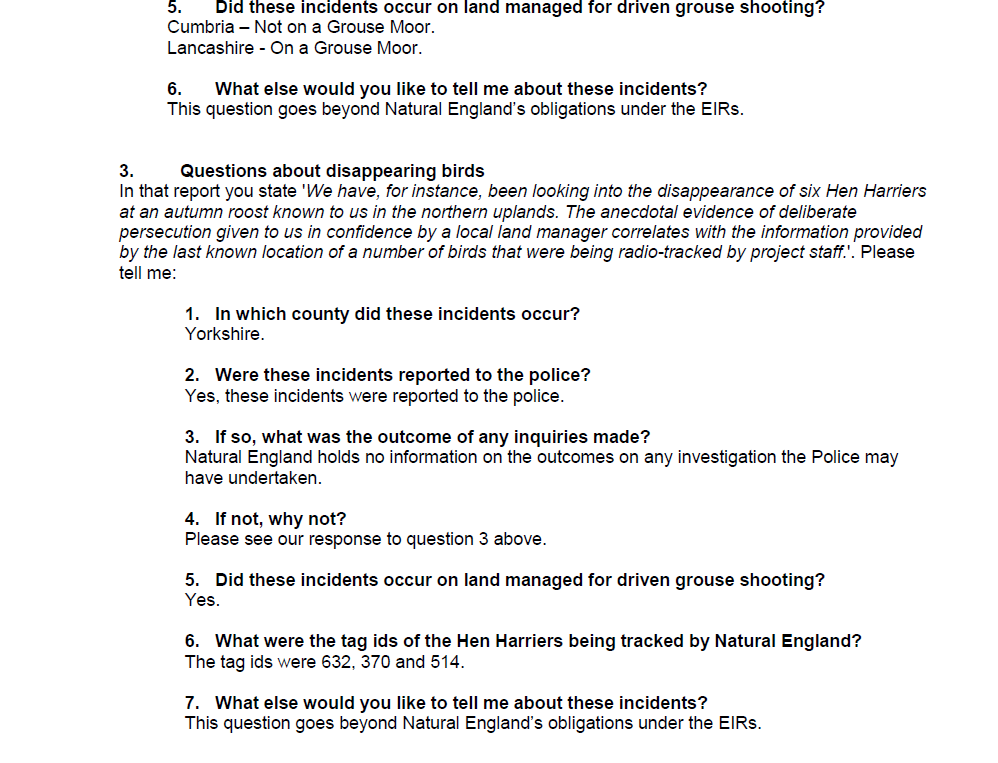 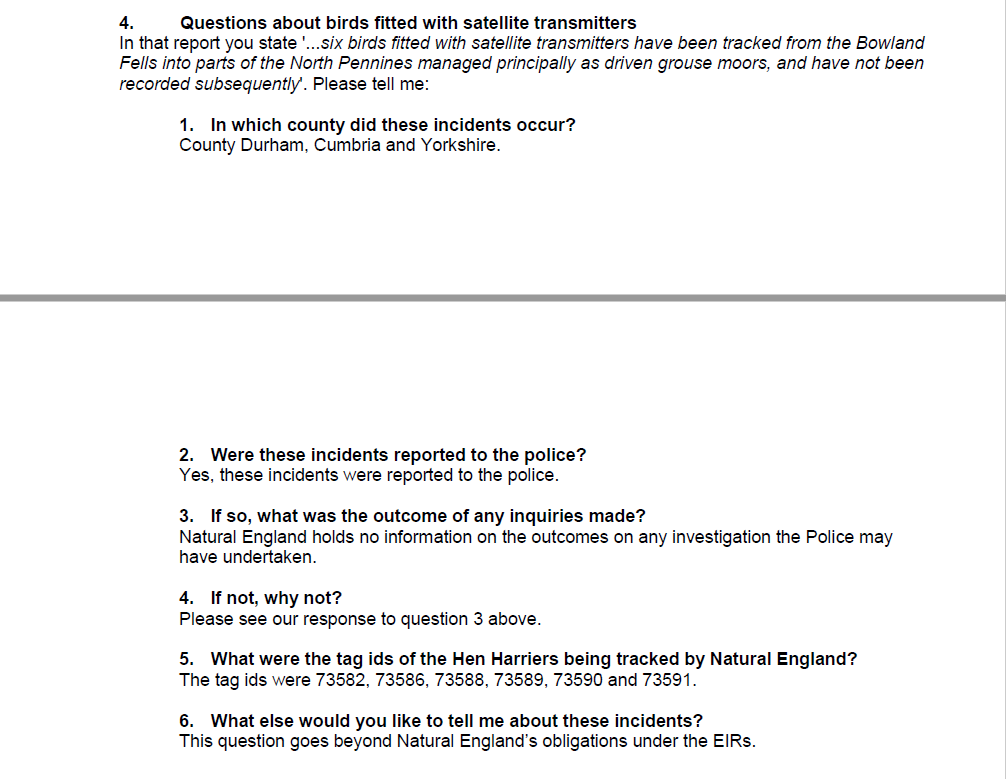 Questions 1 and 2: Natural England admit that they can’t be sure whether or not they reported three illegal acts of heather burning and two cases of nests with eggs being ‘removed’ (sounds illegal to me!) to the Police.  That’s inept of them to say the least.

Question 3: this was the case of six Hen Harriers disappearing at an autumn roost. We now learn that this was on a Yorkshire grouse moor, as I rather suspected it was – in fact I reckon I know exactly where it was (I’d put my money on it being west of the A1 for a start!). We also learn that three of the birds were radio-tagged by NE.  NE supply three tag ids for these birds and we can check them against the skeletal information released, under pressure, by NE in September this year.

Tags 632, 514 and 370 were all fitted in Bowland in June 2003 and ceased transmitting on 5 September 2003, 16 September 2003 and 8 October 2003 respectively. These tags are all listed in the September 2017 data ‘release’ as ‘Missing Fate Unknown’ but we now know that NE were told that they had been bumped off, along with three other birds apparently, at an autumn roost over a period of just over a month.

Question 4: this was a question about six satellite-tagged Hen Harriers from Bowland into parts of the North Pennines which were managed primarily for grouse shooting.  In the 2008 report these were all mentioned in a section on suspected persecution incidents.

The tag id 73586 is, according to the data ‘release’ of September this year, a tag that was fitted in Cumbria, not Bowland. Whilst it is possible that the tag was fitted in Cumbria and then the bird passed through Bowland on its way to its demise in Yorkshire this would be a strange way to describe the bird. I’ll ask NE why there is this apparent contradiction between the only two versions of the data that are in the public domain.

There’s something odd about tag id 73591 too. This bird was tagged in Bowland in June 2008 and ceased transmission in Bowland in September 2008.  Bowland is not in the North Pennines and so it is difficult to see how this bird got into this list. I’ll ask NE to clarify.

And there’s something very odd about tag id 73588 which certainly didn’t travel far as it was tagged in Bowland on 7 July 2008 and ceased transmitting in Bowland on that very day according to the data ‘release’ of September this year.  I’ll ask NE to clarify.

So what should we take from the NE response?

But I do know that Natural England is not fit for purpose.

20 Replies to “NE don’t know much about their study”