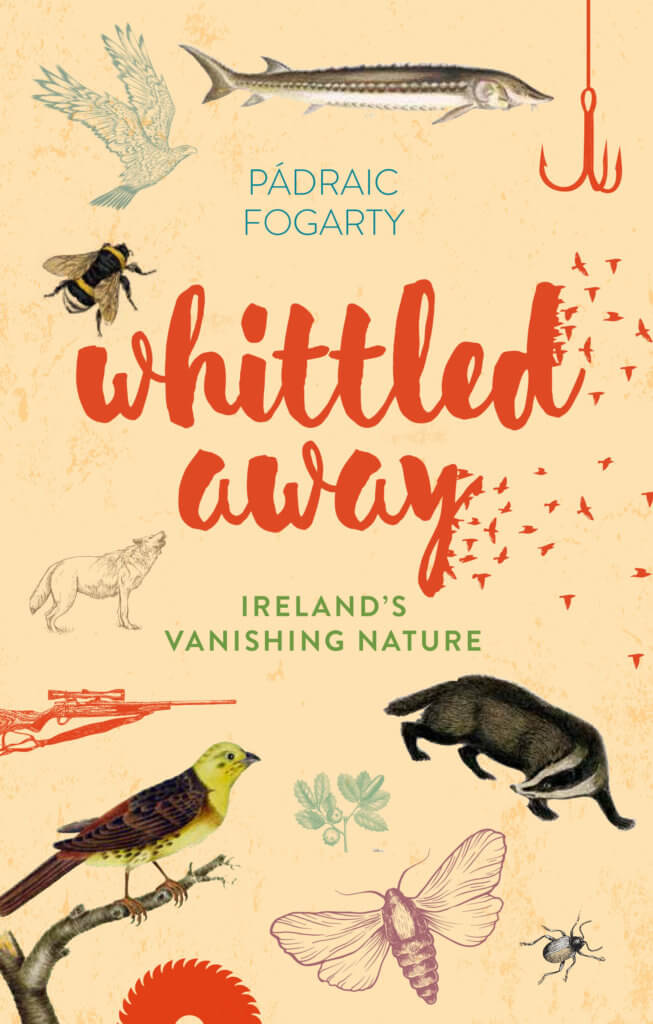 The title of this book is taken from an Irish Government report dating back to 1969 raising concerns that Ireland’s natural heritage is being gradually ‘whittled away’. The report suggests, in the understated way of the age, that this ‘could represent a serious loss to the nation’. You could imagine much the same wording in a government report today, half a century on – a bit more jargon perhaps, but the same message about the importance of stemming the losses. And yet, despite the endless reports, the relentless chipping away of wildlife continues largely unchecked, as described in considerable detail in this book.

The main topics in the book will be familiar to anyone interested in conservation though, unsurprisingly, there is a strong emphasis on the issues most relevant to Ireland. So, whilst farming is dealt with comprehensively, the focus is on pasture and livestock rather than arable. Marine issues get plenty of space and there is some impressive historical detail showing just how much has been lost from the seas around Ireland through decades of overexploitation. The sad story of Ireland’s diminished and degraded peat bogs is also set out at length.

Separate chapters deal with lost species and the culling of problematic wild animals which seems to be done with even more enthusiasm, and less public outrage, than across the water in Britain. If England and Wales lag behind Scotland in some aspects of wildlife legislation and political engagement then Ireland is perhaps a step further back still. Ireland apparently outscores the UK when it comes to adverse European Court judgements relating to protected sites and I was amazed to learn that the Basking Shark remains unprotected in Irish waters – though there is no suggestion that anyone still hunts them. The laying of poison baits supposedly aimed at (but not always hitting) foxes and corvids was legal until outlawed by legislation introduced as recently as 2010. Badger culling may be relatively new in England but in Ireland landowners have been quietly whittling away the population for decades and over 100,000 animals have already been killed.

The book contains a lot of detail and it sometimes takes a while to come around to the main, take-home points in each chapter. There is also quite a bit of repetition with core subjects resurfacing at regular intervals. Perhaps it’s a little longer than it needed to be, though it never becomes dense or dull, and repetition at least helps to reinforce the main arguments.

The final chapter offers broad suggestions for how things could be done differently in future. Reading between the lines, I sense this is a plea for change based more on hope than expectation. There is scope for small (but welcome) gains in specific areas – a reintroduced species here and there, the occasional rewilding project, and perhaps greater protection and community involvement for a few of the surviving fragments of raised bog. But to inspire more substantial change the book will have to reach the influential landowners and politicians who seem blissfully unaware there is even a problem.

Some familiarity with Ireland and the organisations involved in rural issues will help readers get the most out of this book, though the author has taken care to explain things sufficiently to make it accessible to ‘outsiders’. He has been closely involved with the Irish Wildlife Trust, serving for a time as its chairman and campaigns officer, and half of the royalties from the book will go to help the trust’s work.

Whittled Away: Ireland’s vanishing nature, by Pádraic Fogarty is published by The Collins Press.