I find the relatively new Westminster parliament website for these e-petitions fascinating, particularly because you can now look at maps of where the signatures come from (and find easily, the number of signatures for each constituency).

This is the map for Rob’s e-petition to ban toxic lead ammunition: 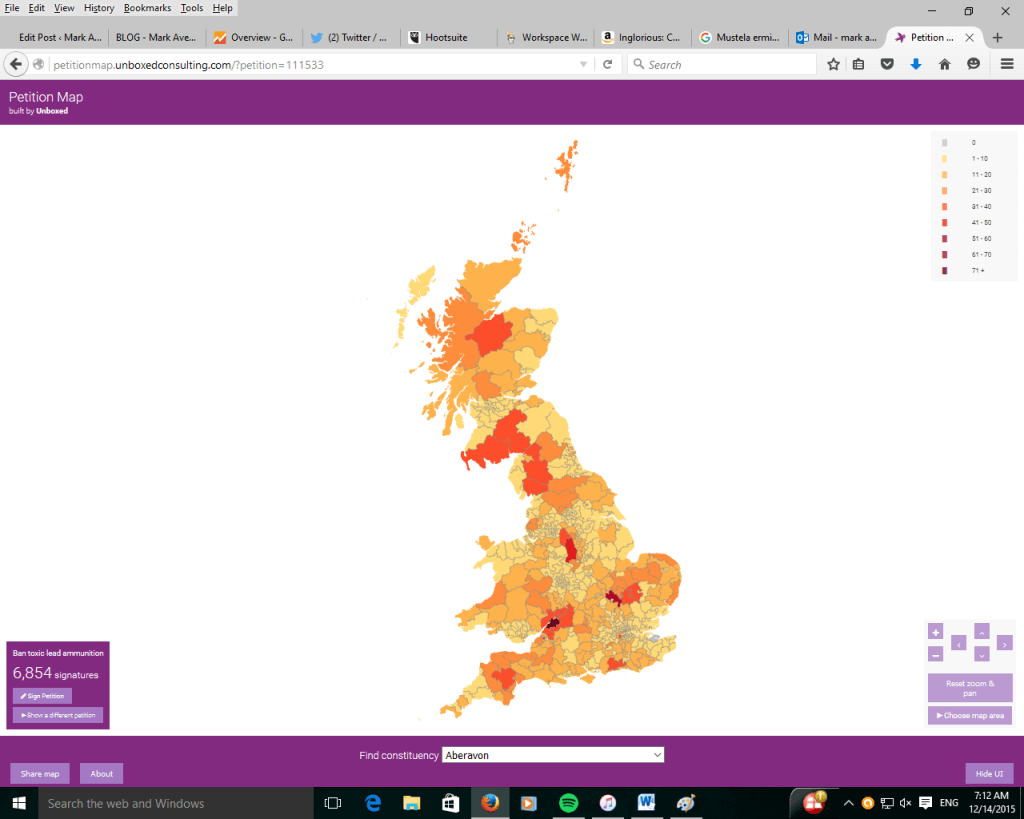 It is very clear what is happening here.  Several of the hotspots on this map are clustered around WWT centres: Slimbridge, Arundel, Martin Mere and Caerlaverock. Because WWT has asked its supporters to sign this e-petition they have! There is also a hotspot in the Beds/Cambs region which I would guess is partly because of the Welney effect, partly because Cambridge is full of wildlife organisations and partly because RSPB staff based at Sandy (but living scattered around the area) have signed up in numbers.

I don’t know whether you can spot anything else interesting here but I am beginning to think that I ought to move to Derbyshire as that has a pretty go-ahead Wildlife Trust and always seems to produce lots of signatures for environmental e-petitions.

Let us now turn to the ‘keep toxic ammunition’ map: 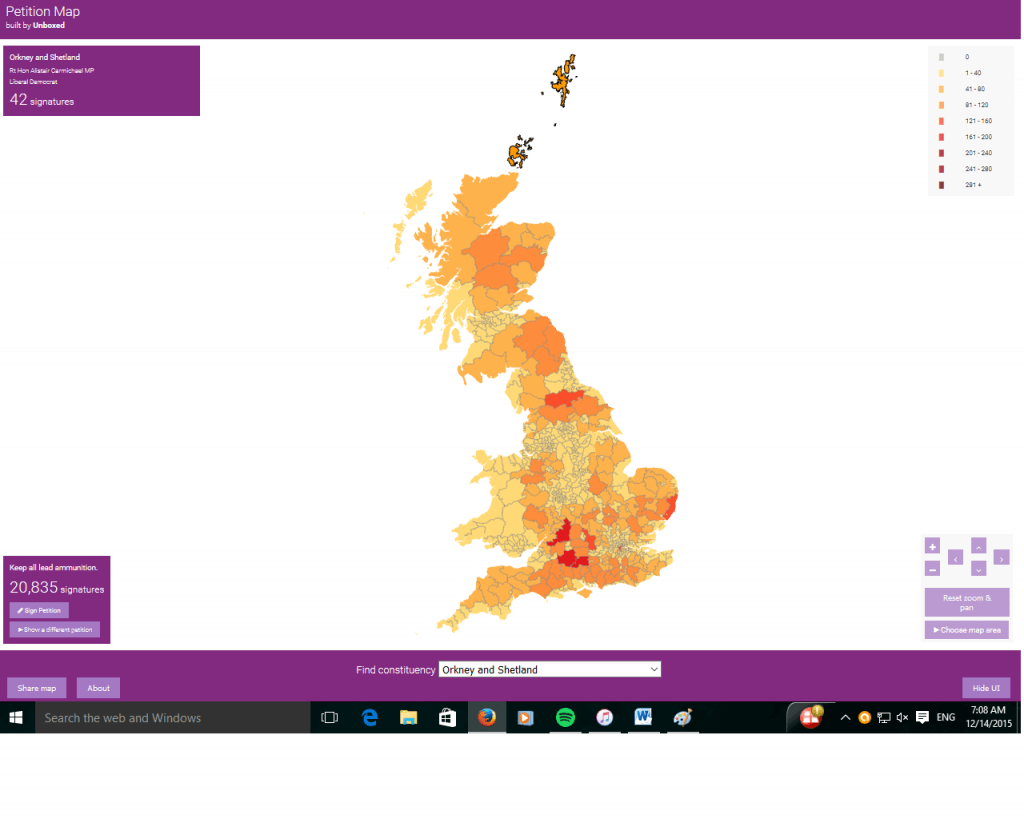 This is interesting too. Two of the constituencies with the highest support for toxic ammunition are Richmond (Yorks) and The Cotswolds whose MPs spoke in the Westminster Hall debate on toxic ammunition last week.

Can you spot anything else interesting here?

Given that we know that the supporters of the ban driven grouse shooting e-petition are mostly rural voters living in Conservative constituencies (with good showing of LibDems and Green voters – see here, here, here and here) I thought it would be interesting to look at the London constituencies for these two competing e-petitions.

Here is the map for ‘ban toxic lead ammunition’: 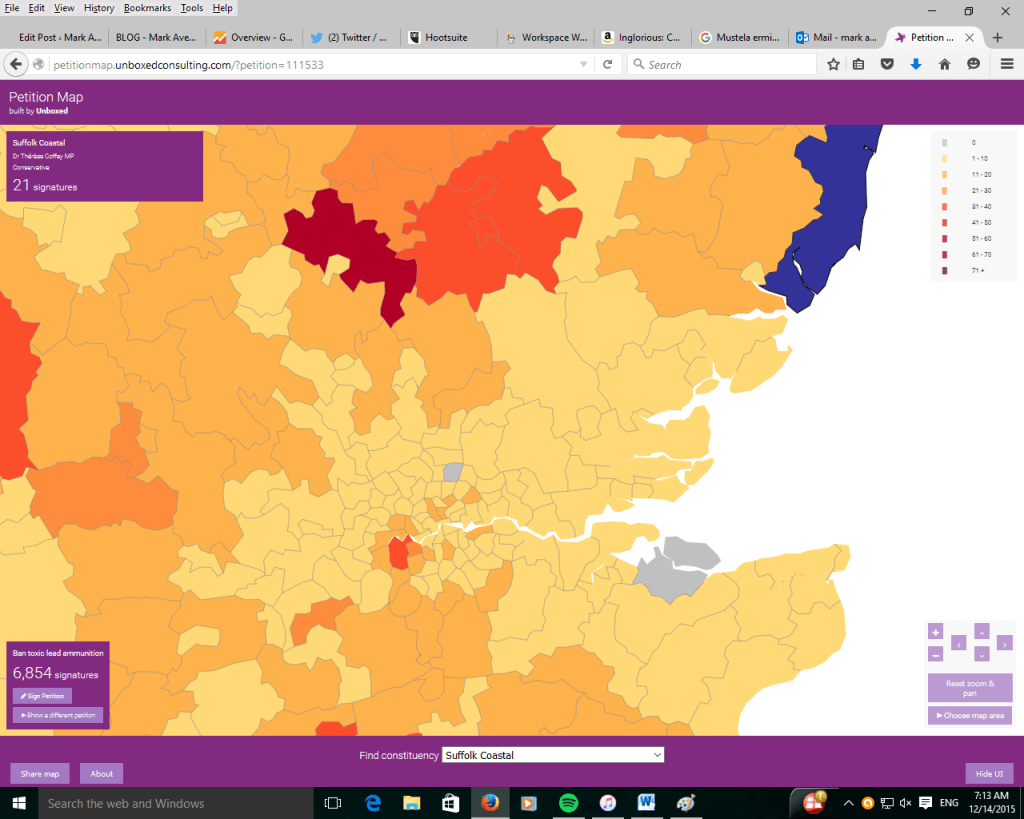 The hotspot here is centred around another WWT centre – the Barnes Wetland Centre in Zac Goldsmith’s Richmond Park constituency and surrounding constituencies.

In contrast, the ‘keep the toxic ammunition’ e-petition looks like this: 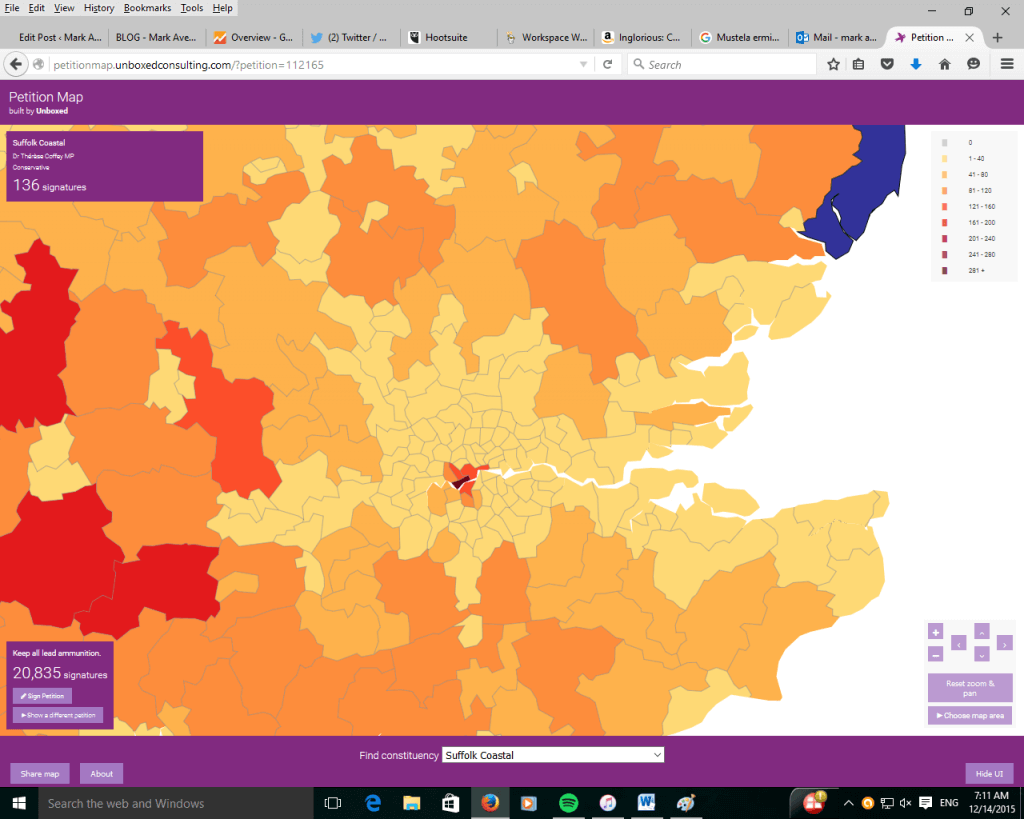 That’s really quite different. Chelsea and Fulham has, by far, the highest number of signatures of any constituency in the UK (288!) with neighbouring constituencies of Westminster, Kensington and Battersea being very supportive too. It’s a slightly unexpected pattern – at least that’s what I thought.  What do you think?

Well done to WWT for, quite visibly, mobilising some of your members. Keep at it please and we’ll see those numbers going up steadily over the next few weeks. I wonder what the RSPB has up its sleeve to mobilise its members to this cause that it supports too?

Wherever you live, please do sign Rob Sheldon’s e-petition to ban toxic lead ammunition and to replace it with the safer alternatives that are widely used by shooters elsewhere.  Perhaps today we can get it past the 7000-signature milestone.

22 Replies to “Taking lead off the map”