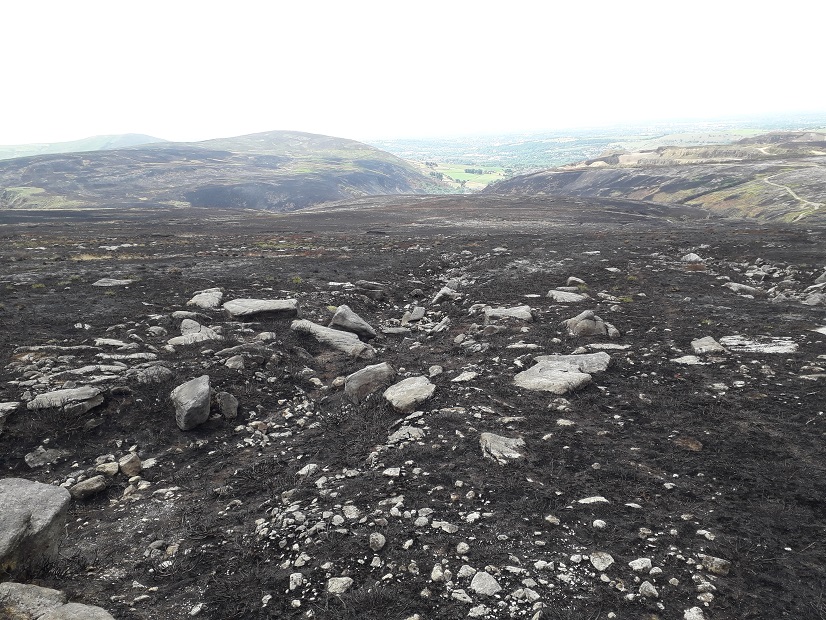 The moorland above Carrbrook Greater Manchester has been devastated by one of the largest moorland fires in recent years. The fire started on 24th June and burnt for around three weeks covering an area of 18 sq km. The cloud of smoke was visible from space and residents had to abandon homes. I’ll take a look at this and a couple of other large fires and see if any conclusions can be drawn about the type of moorland management that might reduce the spread and intensity of wildfire. I’ll also take a look at how access is managed in times of drought and the call from landowners to build more tracks to tackle wildfire. 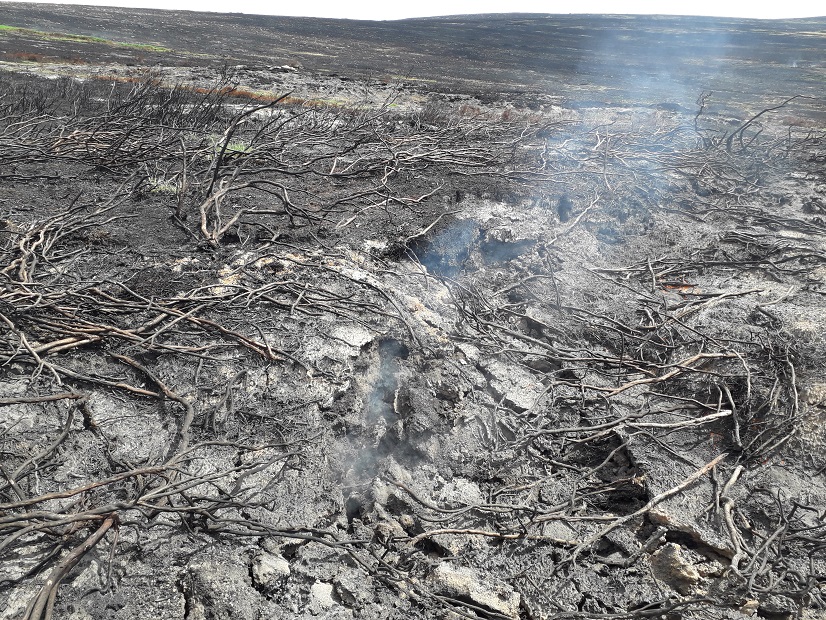 There are small areas of peat above Carrbrook which are still burning. The pale substance in the photo above is ash which shows that the fire was so intense that it has burnt the peat completely. The moorland here (Buckton and Swineshaw Moors) is owned/managed by Enville Estates who are a family of landowners with lineage going back to Lady Jane Grey. The estate adjoins RSPB managed Dovestone.

Buckton and Swineshaw Moors lie mainly outside the National Park boundary, outside the Dark Peak SSSI and outside South Pennines SAC/SPA. The exception is Blindstones Moss at the north east corner which is SSSI unit 047 and has an Unfavourable No Change assessment. This is due to the blanket bog having large areas of bare peat. There is supposed to be a restoration programme here under a HLS agreement worth £1.19 million (over 10 years) but I saw no sign of gully blocking or re-seeding anywhere on the estate. 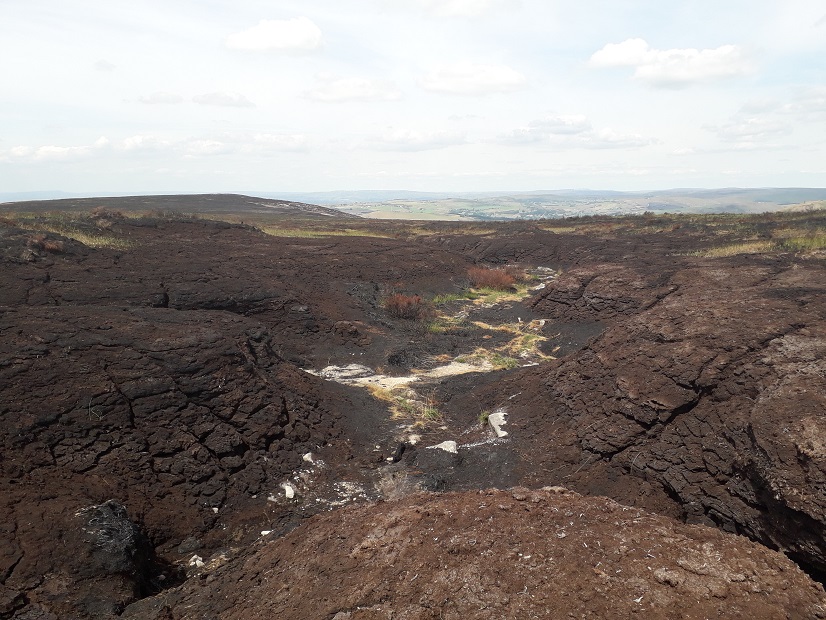 Example of large area of bare peat mainly untouched by the fire and wide gulley with no blocking. I found this lack of restoration shocking given the obvious work that has taken place over almost all the Dark Peak. 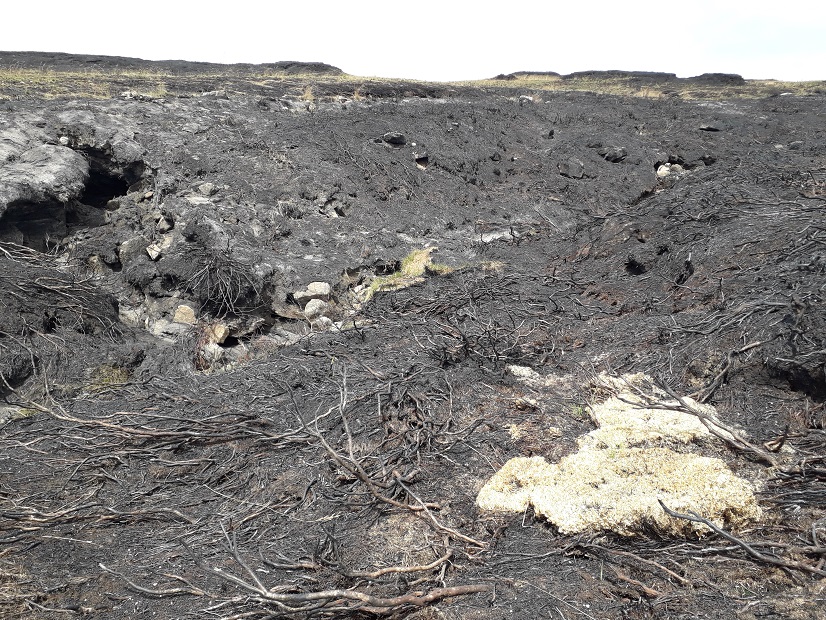 This gully has been devastated by the fire and the only sign of vegetation left is the white blob at the bottom right corner of the photo. This is sphagnum moss which was still wet inside. If this gully had been blocked, the sides regraded and planted with cotton grass and the base filled with sphagnum plugs, it would look considerably better even after this huge fire. The fire completely destroyed any dwarf shrub (mainly heather) dominated slopes but areas of cotton grass escaped lightly and have flourished in the two weeks since the fire was extinguished. 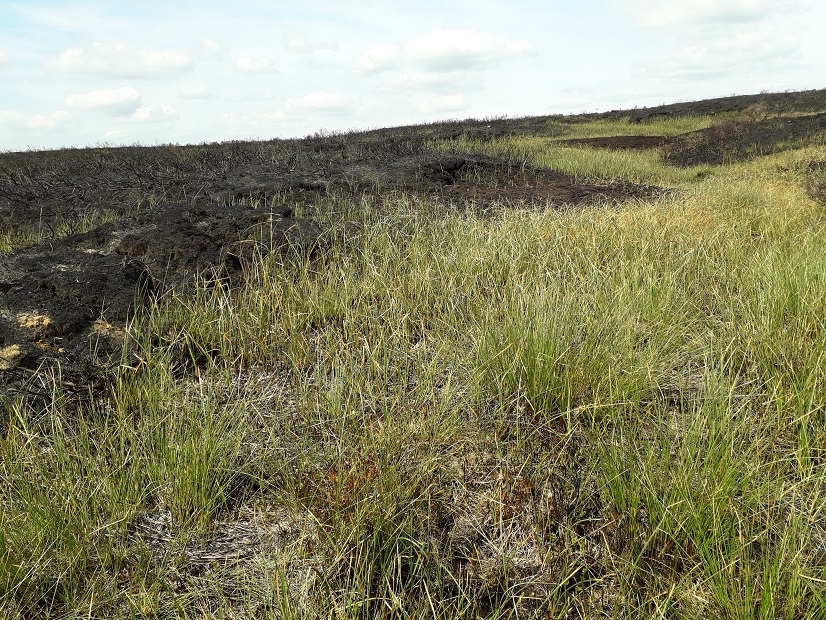 The moorland grasses are doing well on obviously damp soil with a higher water table. Compare this to one of the adjacent areas of bare peat which has developed large cracks through the dry spell. 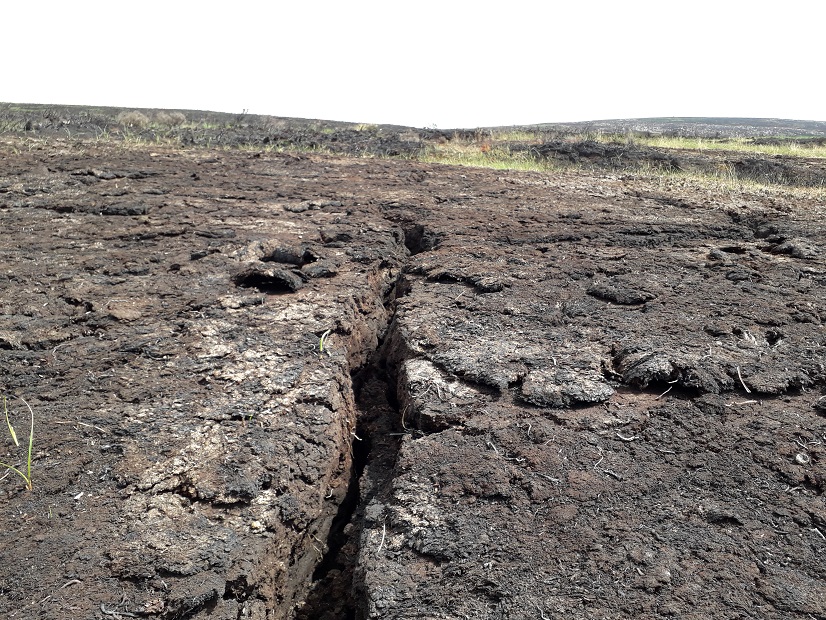 Common sense tells us that the cotton grass is growing on much damper soil than the bare peat and with a little help, established cotton grass will then go on to promote larger wet areas of moor. But we can call on some hard scientific data here as well. The Kinder Plateau has benefitted from one of the original restoration projects and is now completely covered in vegetation including a mix of moorland grasses and sphagnum, apart from an area of around 1 ha that has been left in its previous (bare peat) state as a control. We need to call on the results of this project (relative water table depths) to show the benefits of restoring Buckton and Swineshaw moors in this way to create a much wetter habitat. 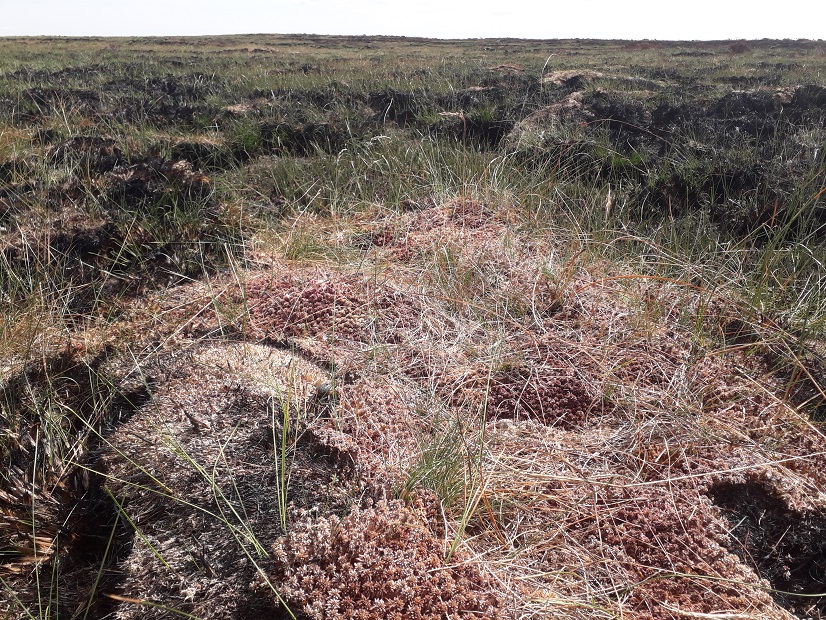 The sphagnum and grasses above have survived the fire largely intact. Moors for the Future Blanket Bog Management Guidance tells us “There is recognition that the risk of severe damage by wildfire on a wet, well-functioning blanket bog is relatively low”. A walk round these devastated dry moors certainly points us in that direction.

Eastern Moors are jointly managed by RSPB and National Trust and Big Moor suffered a wildfire at the beginning of May with around 43 ha affected. The fire here was particularly tragic as this moor has a rare colony of upland adders. Big Moor is molinia dominated and programmes are under way to reduce its prevalence. It looks like a fire on its own will not remove molinia as you can see in the image below taken around 2 months after the fire. 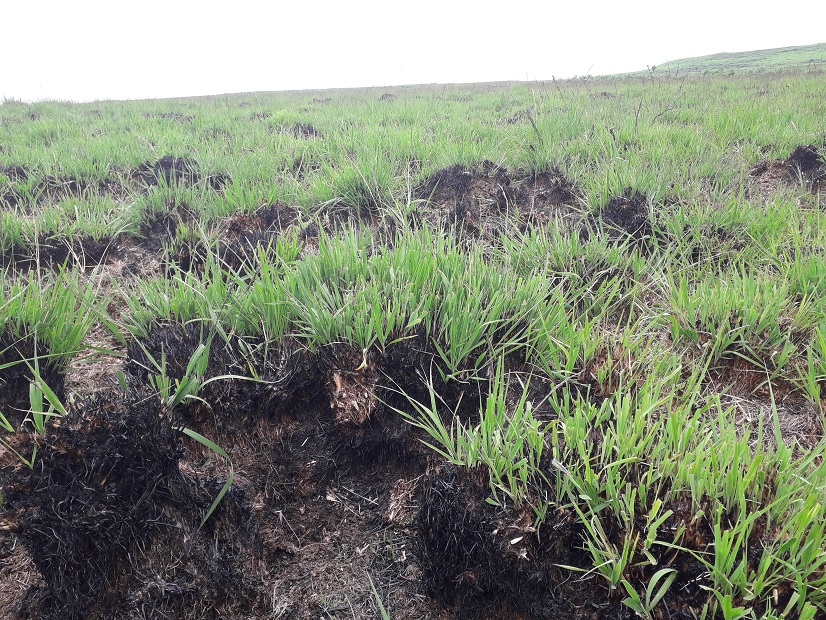 A large number of people from throughout the National Park helped control this fire but it was only when large amounts of water were used that the fire was extinguished. Two methods were employed – bowsers on the rear of ATVs  and water dropped by helicopter. Neither of these required the use of a network of stone-surfaced roads and the Peak Park is finally taking action on the 2 tracks I mentioned in a previous blog with both surfaced routes to be removed. As with the Carrbrook fire arson was suspected and I don’t think any management strategy can provide for such actions. Sometimes of course open access to moorland is withdrawn due to fire risk. The Peak Park Authority uses the Met Office Fire Severity Index  – when the risk is Exceptional the moors are closed. The FSI does not assess the risk of a wildfire occurring, it concentrates on the risk of a severe fire spreading. At the time of writing (end of July) the FSI has not exceeded “very high” and access remains open. I’d welcome blog readers’ opinions on this.

Burning is sometimes used as a management tool to provide grazing on fresh molinia. The photo below shows a managed burn of around 100 ha on Chelburn Moor Lancs in 2017. This area is classified as Upland Bog and has SSSI/SAC/SPA protection. It did at one time host a rare colony of Twite and there was certainly no chance of these birds returning last spring. An enforcement action was undertaken by the local Fire Operations Group. 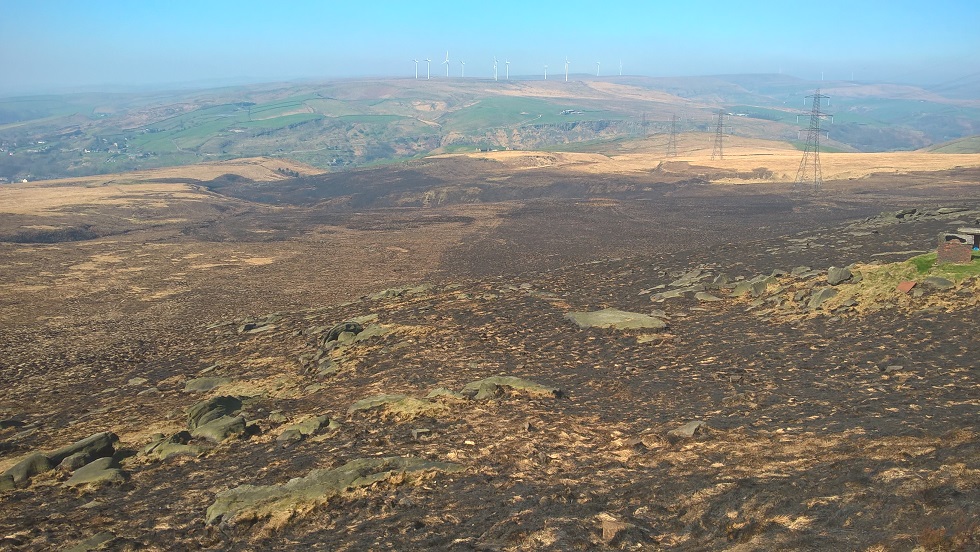 From these three examples it is of course the first that will require significant intervention. It’s obvious to me that Buckton and Swineshaw moors need to be included in the Dark Peak SSSI and the South Pennines SAC/SPA but I’m sure there are numerous administrative reasons why this won’t happen.  A large amount of public money needs to be spent restoring these moors for the benefit of all. However at the moment the estate talks about “undertaking a very exciting restoration of a 3000 acre grouse moor” with the aim that shooting days will soon be for sale. Local MP Jonathon Reynolds has expressed concerns in parliament that communities on the edge of the moors are at increased risk of flooding. In the short term the Environment Agency needs to install flood defences to protect those homes and in the longer term Natural England and Moors for the Future need to use their expertise to turn these devastated slopes into wet, functioning blanket bog which is after all their natural state.